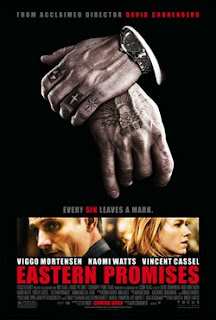 CRIME/DRAMA with elements of a thriller

What makes a great performance is more than just the ability of the actor to crawl into the skin of the character he is playing. It’s also the ability to give the character depth and weight – the illusion of belonging in the time and place in which the film is set. This is the kind of performance that Viggo Mortensen gives in Eastern Promises, and that performance has resulted in a 2008 Best Actor Oscar nomination.

Eastern Promises is set in London and revolves around the mysterious and charismatic Russian-born Nikolai Luzhin (Viggo Mortensen), a driver for one of London's most notorious organized crime families of Eastern European origin. The family, itself a part of the Vory V Zakone (thieves in law) criminal brotherhood, is headed by Semyon (Armin Mueller-Stahl). Semyon exudes courtly charm as the welcoming proprietor of the plush Trans-Siberian restaurant, but that is an impeccable mask to cover a cold and brutal core. Semyon's volatile son and enforcer, Kirill (Vincent Cassel), is more tightly bound to Nikolai than to his own father, and Kirill uses Nikolai as his clean-up guy – disposing off bodies and killing at Kirill’s command.

Nikolai's carefully maintained existence is jarred once he crosses paths at Christmastime with Anna Khitrova (Naomi Watts), a midwife at a North London hospital and a child of Russian immigrants. Anna has possession of a diary belonging to Tatiana, a young teenager who dies while giving birth to a baby girl. Anna resolves to use the diary to try to trace the baby's lineage and relatives, and also to perhaps discover who harmed Tatiana.

Semyon wants the diary. When Nikolia learns that Anna has discovered incriminating evidence against his “family,” he finds his normally steely resolve compromised. Nikolia unexpectedly finds his loyalties divided, wanting to protect Anna, for whom he is developing strong feelings, and wanting to be loyal to Vory V Zakone. This begins a harrowing chain of murder, deceit, and retribution that will reverberate through the darkest corners of Zemyon’s criminal empire and through the London Russian underworld.

It would not be an exaggeration to say that Viggo Mortensen, so will remember for his role as “Aragorn” in The Lord of the Rings, has come of age as both an actor and a movie star. His turn as Nikolai is not an ordinary crime thriller performance; he simply isn’t just another film thug. Mortensen creates an aura of deep mystery and daunting ruthlessness around Nikolai, and being the center of the film, this rich character makes Eastern Promises an unusually strong crime thriller.

The measured, smoldering confrontations that shape and define Eastern Promises come from the well of Nikolai’s soul, a soul given to a fictional character by a great actor coming into his own.

NOTES:
2008 Academy Awards: 1 nomination for “Best Performance by an Actor in a Leading Role” (Viggo Mortensen)

Posted by Leroy Douresseaux at 1:36 PM