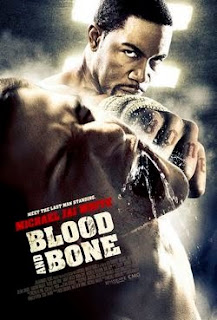 For all intents and purposes, the martial arts movie, Blood and Bone is a straight-to-video action movie. According to the website, IMDb, Blood and Bone only received a theatrical release in Lebanon. Some may think that this says something negative about the movie’s quality, but Blood and Bone is absolutely thrilling. The movie also says that Michael Jai White should be a big time action movie star.

When he gets out of prison, Bone (Michael Jai White) heads for Los Angeles with a plan for revenge. He enters LA’s underground fight scene with the help of a scrappy manager named Pinball (Dante Basco). Bone made a promise to Danny (Kevin Phillips), his prison cellmate who was murdered, that he would take care of Danny’s girlfriend and son. This promise brings him into conflict with James (Eammon Walker), an ambitious gangster, who has the most feared fighter in LA’s underground scene, the massive Hammerman (Bob Sapp).

In Blood and Bone, Michael Jai White reveals himself as a charismatic action star who is as cool and stoic as he is an ass-kickin’ superhero. Bone is similar to one of those characters that Clint Eastwood plays in Westerns – the mysterious stranger who suddenly appears on the scene specifically to deliver justice/revenge. Mix that with some Bruce Lee, and we have Isaiah Bone. White as Bone, however, is better as a martial arts hero than either Steven Seagal or Jean-Claude Van Damme. Over the course of his career, White’s acting has also improved, and he is much less stiff than he was in his first leading role in a movie, as the title character in Spawn (1997).

In Blood and Bone, White is smooth, funny, and occasionally, even droll and witty. He really comes alive as a martial artist in the film’s numerous fight scenes, and White is so exciting to watch that it may seem to some (like me) that there aren’t enough fight scenes and duels in Blood and Bone. White is electric when he is going up against prison thugs, street fighters, gangsters, and the film’s lead villain, James.

By the way, Eammon Walker is excellent as James, full of pathos and urgent ambition. This is one of several quality performances from actors who make the best of the awkward sounding dialogue given to them. Director Ben Ramsey not only gets the best out of many of his actors; he also paces the film so that it is always making the viewer anticipate something good.

It would be good to see the character Bone come back for a sequel. If he doesn’t bring him back, Michael Jai White has certainly given him a memorable one-shot at stardom in the surprisingly exciting, low-budget fight movie, Blood and Bone.

Posted by Leroy Douresseaux at 12:39 PM