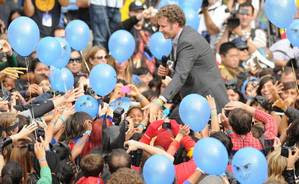 Los Angeles, CA (Oct 2, 2010) – Will Ferrell and 1,580 of his closest costumed superhero friends united on Saturday, October 2nd and made heroic history as they smashed the current Guinness World Records title for Largest Gathering of Superheroes. The Mega-event was open to caped crusaders everywhere and was hosted by DreamWorks Animation to celebrate the November 5th release of MEGAMIND.

“We just broke the record for the biggest gathering of super heroes to kick off Megamonth. If everyone would just stay in their costumes for all of October, we could break another one.” - Will Ferrell on Saturday, after breaking the Guinness World Record

The attempt commenced promptly at 10:00 a.m. as superheroes swooped into L.A. LIVE in downtown Los Angeles. To qualify for the record attempt, participants had to arrive dressed as an easily recognizable superhero that has appeared in a published book, comic, television program or film, as stipulated by the record guidelines. A minimum of 1,501 superheroes were needed to break the previous world record.

Will Ferrell, alongside Megamind, took to the stage at L.A. LIVE to lead his band of superhero supporters into the record books. The feat was witnessed by official Guinness World Records Adjudicator and Spokesperson, Stuart Claxton, who judged and verified the attempt adhered to the strict guidelines of the record category before he announcement that the record had been successful broken.

The world record setting event marked the kickoff of MegaMonth, an official month dedicated to Mega-events across the country in celebration of the upcoming DreamWorks Animation release of MEGAMIND, starring the voices of Will Ferrell and Brad Pitt.


About “MEGAMONTH”
Events scheduled across the country, which include Mega regional contests, Mega marathon weekend races and Mega food festivals. MegaMonth is DreamWorks Animation’s month of Mega events. These events are Mega-big, Mega-bold and Mega-Mega!

About “MEGAMIND”
Megamind is the most brilliant super-villain the world has ever known…and the least successful. Over the years, he has tried to conquer Metro City in every imaginable way - Each attempt, a colossal failure thanks to the caped superhero known as “Metro Man,” until the day Megamind actually defeats him in the throes of one of his botched evil plans. Suddenly, the fate of Metro City is threatened when a new villain arrives and chaos runs rampant, leaving everyone to wonder: Can the world’s biggest “mind” actually be the one to save the day?