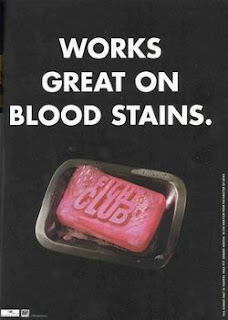 DRAMA/THRILLER with elements of action

Some films fans believe that the glamour of old Hollywood, or of the so-called Golden Age, is gone. True or not, there are young actors today that the camera loves as much as it did Humphrey Bogart or Greta Garb, such as Keanu Reeves, Tom Cruise, Gwyneth Paltrow, and Johnny Depp among others. Another star that the camera definitely loves is the talented and ambitious Brad Pitt.

In David Fincher’s (Se7en) Fight Club, Pitt plays the alluring stranger Tyler Durden who introduces a disillusioned spiritual brother Jack, who is also the film Narrator, (Edward Norton, American History X) to the living. Jack has a white color job, suffers from insomnia, and consumes expensive, brand name items to fill in the hole in himself and his life. Jack becomes Durden’s first convert to Fight Club, which rapidly grows into an underground cabal of restless, directionless GenX’ers and late Baby Boomers. The club meets in hidee-holes, and the members pummel each other to a bloody mess. Perhaps, it is because pain is life and life is pain. Perhaps, these young men, who never knew the Great Depression or life as a soldier/combatant in an international war, need to know pain and suffering. Maybe, through beating each other they get to be men with each other etc. blah, blah, blah.

During his career as a music video director, Fincher showed enormous promise as a filmmaker with his videos for Madonna: Express Yourself, Oh Father, and Vogue. The politics of studio filmmaking crushed his debut Alien3, but with Se7en and The Game, his potential to be one of the best visualists since Ridley Scott (Blade Runner) and David Lynch (Blue Velvet) was again show to audiences around the world.

This film by Fincher is as much visual and symbolic as it is literal. For all its notions of male empowerment and of cutting away the material trappings of a corrupted civilization, Fight Club really delineates spiritual conundrums and the struggles with identity. It is the visual equivalent of a novel, but the novel as art and literature. With all that camera weaving and dodging, Fincher is essentially writing a novel. What words do for a book, his camera makes images do for a film. The film digs deeper than just angry white boys. Why are they angry? When are they angry? How are they angry? What else is going on in the world of Fight Club? Fincher answers those questions and builds a complex structure of story and environment that becomes a film. While it is eye candy for the male in the vein of Pulp Fiction, Fight Club has visual layers and subtexts awaiting the ambitious viewer. Does it take music video directors and directors of commercial advertisements to realize that the story, the characters, and the setting are best conveyed visually in film because a movie is all about what’s on the screen?

Norton is very good; a talented actor he can play the gamut of human emotions, from extreme to subtle. Helena Bonham Carter (Wings of the Dove) is a very talented actress, but she’s often lost in supporting roles. Here, as love interest/sex partner, Marla Singer, her part is extraneous, but the camera loves her. Whatever should could have brought to enrich the story is lost. The true gift of this movie is Pitt as the puckish phantasm, Durden. Whenever he gets a good role, Pitt lights up the screen, and the movie surges with energy and vitality. Many filmmakers have wasted his good looks and great talent; Fincher takes full advantage of having him.

The film does have its flaws, notably Jack’s narration, (in addition to the short shrift of Marla), which is sometimes redundant when the visuals serve the same purpose. Some interesting characters end up as ciphers and aimlessly fill up screen time when they could have served a definite purpose. However, Fincher and screenwriter Jim Uhls have created a beautiful and surrealistic film that is, like successful artistic efforts in other mediums, a statement about the time in which it appears. And heck, Fight Club is just plain fun to experience.