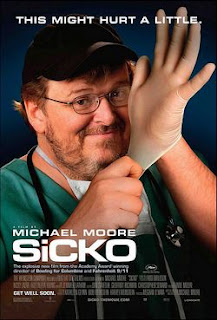 In his most recent documentary, Sicko, Oscar-winning filmmaker Michael Moore (Bowling for Columbine) set his sights on the state of the American healthcare system, examining the plight of both the uninsured and the under-insured. Moore’s argument: in the world’s richest country, 45 million people have no health insurance, while HMO’s grow in size and wealth.

During his investigation, Moore uses his trademark humor and confrontational style and attempts to shed light on the complicated medical affairs and tragedies of a wide-range of Americans. Sticking to his tried-and-true one-man approach, Moore also visits Canada, Great Britain, France, and Cuba to compare how those countries provide basic health care coverage free for their citizens.

Michael Moore is clearly dismayed that so powerful and wealthy as nation as the United States should put so many of its citizens in the position of gambling their health will always be good. Sicko seems to reveal that Moore is equally surprised and perhaps angry that the system is such a mess that even people with health insurance are not always better off than the uninsured. Moore shows how the system got that way, and then relying on people rather than statistics, he introduces his audience to various Americans who’ve suffered as a result of a system that emphasizes profit over the well-being of its patients. Some sick people even get a death sentence – in the form of a refusal to pay for a lifesaving procedure – personally from their insurance provider.

The carnival atmosphere that hangs over Moore’s films (especially Fahrenheit 9/11) is still here, but Moore rarely loses focus in reminding us that American can do better for more of its citizens when it comes to healthcare. Though his surprise sometimes comes across as disingenuous, Moore uses droll humor and sly wit to ignite the fire in your belly and the rage in your heart. I must admit that there is some unintentional humor: some of the services that European governments provide for their citizens border on nanny state overkill, but who has the last laugh? Them or we Americans?

Sicko, Moore’s best film since Roger & Me, demands that American healthcare be reformed to help all citizens regardless of financial status. Moore also argues that only those with something to gain from the status quo will ignore the sobering realities.

Posted by Leroy Douresseaux at 10:34 AM