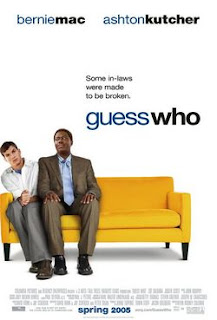 COMEDY with elements of drama and romance

In the famous 1967 film, Guess Who’s Coming to Dinner, a young white woman (played by Katharine Houghton) brings her black fiancé (famously played by Sidney Poitier) home to meet her parents, the mother played by Katherine Hepburn and the disapproving father played by Spencer Tracy.

Director Kevin Rodney Sullivan (Barbershop 2: Back in Business) updates this classic of interracial (a tired, archaic term) dating in Guess Who. This time, Theresa Jones (Zoë Saldaña), a young black woman, brings her fiancé, Simon Green (Ashton Kutcher), a young white man, home to meet her parents, Percy (Bernie Mac) and Marilyn Jones (Judith Scott). Percy has already had a credit check done on Simon and knows that he has a high-powered job at an investment firm, but Percy doesn’t know two things about Simon: (1) he quits his job the day he’s supposed to meet Theresa’s parents who may end up being his in-laws and (2) Simon is white. Complicating matters is that Simon and Theresa plan on announcing their engagement on the very weekend that Percy and Marilyn are holding a big and expensive ceremony to renew their vows after 25 years of marriage. Percy is upfront and blunt with his disappoint in Theresa’s choice of Simon, and Simon tries his best to make friends with Percy. Will Percy ever learn to like… or at least tolerate Simon?

Guess Who is more funny than smart, and it’s actually very funny when it deals with tense issues of interracial dating and race relations in an off-handed way. Several times the films seems as if it wants to deal with America’s proverbial elephant in the room (race), but most of the time it has to awkwardly limp away from that after fumbling the ball at the 20-yard line and getting injured. Guess Who is a film about race relations that never uses the word “nigger,” but feels safe using the ineffective racial slur, “honky.” That is the best Guess Who could do as far as walking the tightrope between what is acceptable and offensive. It avoids discussing what people have in common (humanity) and what divides us (skin color, ethnicity, religion, etc.), so it certainly isn’t a daring film. In the end it’s also about as glib as Meet the Parents and, to a lesser extent, its sequel, Meet the Fockers, in terms of dealing with the conflicts that result when an outsider marries into the family and when two really different groups of people come together because of a marriage.

On the other hand, the film is funny, very funny. Mac and Kutcher have excellent screen chemistry; in fact the script gets that right, so much to the point that it could be a text book example of how to make interpersonal dynamics in screen narratives in which a screen duo or couple are of different skin colors work. The drama does seem a little leaden and forced, but if a viewer goes in expecting a typical comedy of errors and misunderstandings, he’ll get one that has a lot of laughs. There is deep fun in watching Mac’s Percy Jones and Kutcher’s Simon Green dance awkwardly around each other for a long time, each graceless meeting helping each to learn about (if not understand) the other.

That makes the inevitable hug of real friendship seem so… well, real, and rewards us with a happy moment to top of a truly funny film. You see, every movie about us (all of us) learning to get along shouldn’t involve cursing, screaming, tears, and finally a tragic incident that brings us together to appreciate life. Sometimes, we can all laugh our way to getting along, or so says Guess Who.