Documentary "No End in Sight" is Simply Brilliant 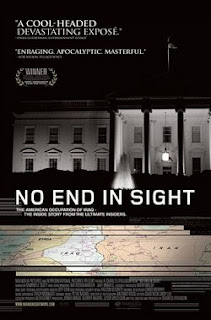 No End in Sight is the acclaimed documentary from award-winning documentary filmmaker (and former Brookings Institution fellow) Charles Ferguson. No End in Sight examines the decisions that led to the U.S. invasion of Iraq in March of 2003 but mostly focuses on the handling of the subsequent occupation as managed by the administration of President George W. Bush. The film, which premiered at the 2007 Sundance Film Festival (where it won the “Special Jury Prize for Documentaries”), features exclusive interviews with central players in the planning and execution of the invasion. Using these interviews, Ferguson also offers a detailed analysis of the American occupation of Iraq through most of 2006.

Masterfully edited and tightly composed as a narrative, No End in Sight provides a broad view of the poor planning and general incompetence in managing post-invasion Iraq. The film also reveals the Bush administration’s ignorance about Iraq and the high-level arrogance that in turn resulted in poor decision making early in the occupation of Iraq. Charles H. Ferguson, a political scientist and software entrepreneur, pulls no punches as he chronicles the twists and turns the Bush administration took to lead American down the path to war, but rather than merely acting as a Bush-hater, Ferguson wants to make us mad. Arrogance, mishandling, GOP cronyism, willful ignorance, etc. cost the United States dearly in Iraq. Ferguson’s argument is that the early days of the occupation should and could have gone much better that it did, but the early mistakes essentially made the occupation of Iraq, over the long run, a disaster for the U.S., if not outright dooming the occupation to failure. The film seems to say, “We should be mad because it should have gone better.”

No End in Sight doesn’t necessarily take sides. Was the 2003 invasion of Iraq right or wrong? Ferguson avoids that question, for the most part. Instead, he focuses on how U.S. success in Iraq was lost from the beginning, and that’s damning enough.

Posted by Leroy Douresseaux at 12:29 PM