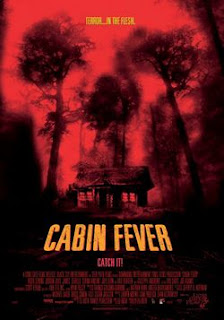 They’ve finally finished college, so five friends (three guys and two young women) rent a cabin in the woods for a weeklong getaway before entering the real world of work. However, the fun ends when one of the friends (James DeBelle) encounters Henry “the Hermit” a dazed and frantic local covered in bloody sores. Not long after that encounter Henry makes it to the cabin. Panicked at the sight of his horrible appearance, the friends fend him off, but contact has been made. Soon, one of the young women becomes ill and her body becomes infested with the same oozing, bloody sores. Filled with revulsion and terror, her four friends lock her away, and then, turn on one another as the fear of contagion sets in their minds.

Cabin Fever closed the 2002 Toronto Film Festival to a packed house. Nine film studios to enter into an intense bidding war for the distribution rights to the film, and the film opened September 13, 2003.

Although the film rifts several horror films, most notably Evil Dead, Cabin Fever is itself an original. The killer in this film is a flesh-eating virus of unknown origin, but the villains are the five college graduates themselves as each friend turns on the other for fear that he or she might have the virus and might pass it on. Eli Roth’s little scary movie is a creepy, Southern gothic delight (filmed partly on location in North Carolina) that could have you washing and scrubbing your body raw after viewing.

Roth and his collaborators: cinematographer, composers, makeup and visual effects crew, etc. spent a lot of time getting the details right. Cabin Fever looks like a film shot for 20 times its cost, which was one and half million dollars. For instance, the cinematography captures and enhances the glorious, burnished hues of autumn. However, some of the rest of the film, in particular the core elements, are pedestrian. There’s nothing in particularly noteworthy about the five lead actors except that they know how to scream, run, fight, and lose their nerves. The characters are about as noteworthy; they are the same panicked kids and small town, backwoods local residents that scare the panicked kids – all of which have appeared in at least one hundred teen-oriented horror flicks.

But Roth, his cast, crew, and fellow filmmakers somehow bring it together the good and bad to make a fun film. Cabin Fever, in a sense, is really about the disintegration of a society when disaster strikes (and as I write this, the U.S. is a little over two weeks into the Hurricane Katrina disaster and recovery). Although the script seems to lack focus or an organizing principle (at times, the characters just wander around, almost in a delaying tactic to hide the fact that this film has no plot), it works like a fairy tale, folk tale, or urban legend. It’s the idea of something eating away at one’s normalcy; of civility oozing away in a stream of blood, of social connections infected, and, worst of all, of a world that doesn’t seem to care or can’t understand that you really freakin’ need help.

Cabin Fever bleeds deterioration, and Peter Jackson liked it so much that he reportedly stopped production on The Lord of the Rings: The Return of the King three times to screen this flick for his crew. He even offered his name and some quotes to help sell the film. Cabin Fever, while not perfect, is more than worthy of Jackson’s attention; the sum overcomes any rotting parts.