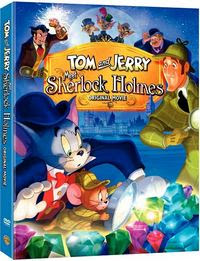 Tom, a house cat, and Jerry, the brown house mouse he chases, have been cartoon stars for 70 years. In addition to appearing in over a hundred cartoon shorts and numerous television shows, Tom and Jerry have also starred in a series of straight-to-video movies, beginning with Tom and Jerry: The Magic Ring in 2001. Tom and Jerry Meet Sherlock Holmes is the sixth in the series, and like the others, is a traditional, hand-drawn (or 2D) animated film. Tom and Jerry Meet Sherlock Holmes finds Tom as the assistant or companion to a beautiful dancer and Jerry as an assistant to literature’s most famous detective.

In London, a trio of bat-winged cats is stealing the city’s most precious and famous jewels. Sherlock Holmes (Michael York) and Dr. Watson (John Rhys-Davies) are on the case, with a little help from Holmes’ mouse, Jerry. Meanwhile, a beautiful club singer named Red (Grey DeLisle) and her cat, Tom, seek Holmes’ help. Red believes that she will be framed for the jewel thefts, and she needs the famous detective to prove that she is innocent. How is Red involved? Is Professor Moriarty (Malcolm McDowell), Holmes’ nemesis, involved, and if he is, how? Classic MGM cartoon characters Droopy, Butch, and Spike and his son, Tyke, join the fun.

Once again, Warner Bros. Animation delivers a high-quality, straight-to-video movie, and frankly, I was shocked by how much I liked Tom and Jerry Meet Sherlock Holmes. The character animation is good, and the characters move pretty well, well enough to make the action scenes, some of which are high-flying or fast-moving, look good. The character designs are also surprisingly good, and the drawing style is reminiscent of late 1980s and early 1990s Disney television animation like Duck Tales.

Here, the people who worked on this movie certainly acted as if they were working on something just as important as a big budget, theatrical animated feature. The background art: the exteriors of building, cityscapes, a graveyard, the countryside and the interiors of houses, a church, and various businesses are not only good-looking, but also convincingly visualize this movie’s idealized Victorian era, London setting.

The most important thing, however, is whether Tom and Jerry Meet Sherlock Holmes is any good, and I’m happy to say that it is indeed good in terms of quality and fun to watch. The story deftly combines Tom and Jerry’s usual antics of beating the crap out of each other with a cartoon, mystery caper full of chases and narrow escapes. These aren’t the best versions of Holmes, Watson, and Moriarty, but they will do. The appearance of classic MGM cartoon characters looking fresh, new, and lively is a bonus. Tom and Jerry Meet Sherlock Holmes will please both old Tom and Jerry fans and young viewers who enjoy animated films.