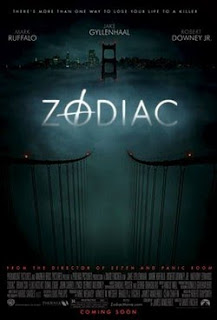 In the 1960’s and 70’s, a serial killer terrified the San Francisco Bay Area and taunted police with his ciphers and letters. As the cryptic killer, sometimes clad in an executioner’s hood, stalked the streets and the countryside, investigators from four jurisdictions search for the murderer. Zodiac, the recent film from director David Fincher (Se7en), is a chilling recount of the murders. The film is based on the actual case files of one of the most infamous unsolved killing sprees in U.S. history, and its characters are also based on real people.

Shy editorial cartoonist Robert Graysmith (Jake Gyllenhaal) has taken an interest in the new case his cynical colleague, the San Francisco Chronicle's star crime reporter, Paul Avery (Robert Downey, Jr.) is investigating. A murderer who calls himself, Zodiac, is hunting humans, and he sends letters to the press, including the Chronicle, and the police investigating the homicides. Homicide Inspector Dave Toschi (Mark Ruffalo) and his partner Inspector William Armstrong (Anthony Edwards) are feeling the pressure to discover who Zodiac is, especially with Avery often getting in the way of their investigation.

The case becomes an obsession for these four men as an endless trail of clues builds some careers and destroys others. As the years pass and they haven’t solved the case, Toschi finds himself dealing with too much department politics and too many false leads, and Armstrong grows weary of being away from his young family. Avery is drinking and drugging his career away. Meanwhile, Graysmith has quietly amassed piles of information on the Zodiac case. He thinks he may be able to solve the case, but will it cost him his family and his life?

Zodiac is a character drama dressed as a Film-Noir mystery/thriller. Although both director and writer (James Vanderbilt) are fascinated by the mystery of Zodiac’s identity, they seem more fascinated that the case would so alter the lives of the men who became obsessed with unscrambling the case’s codes and secrets. To that end, David Fincher gets some high quality performances from his cast, especially Jake Gyllenhaal, Mark Ruffalo, and Robert Downey, Jr.

Although seemingly relegated to the background early in the story, Gyllenhaal’s Robert Graysmith (The real Graysmith wrote two books on the Zodiac killer, including the one upon which this film is based.) gradually comes to the forefront. Quietly and subtly, Graysmith is the one who maneuvers the film’s central theme – that obsession can take over a man’s life and then redefine him, which is to say make him something else and thereby destroy him. It’s a soft performance by Gyllenhaal that nevertheless drives Zodiac, and Fincher has the good sense to accept that, especially as his films tend to feature intense and charismatic characters. Gyllenhaal’s Graysmith is much more approachable than the other characters, and the one to which the audience will attach itself to in order to navigate the story.

With so many high expectations for Zodiac, it is no surprise that Fincher didn’t meet some of them, but few directors could make so beautiful a neo-noir crime film that is as equally beautiful as a character drama. From Mark Ruffalo’s frustrated cop who refuses to let frustration beat him to Downey’s slick reporter – the charming rogue who burns so brightly that he burns out too soon – Fincher uses nuanced performances to build Zodiac. The performances remind us that sometimes the murder victim isn’t the only victim of the crime.