Seabiscuit Uplifting Tale of a Horse and His Boys 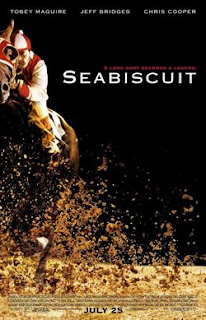 Seabiscuit is the story of three men who are broken by misfortune in their lives and how one unlikely horse becomes a champion and changes their lives. The film is based upon the true story of Seabiscuit, an undersized, Depression-era horse whose story lifted the spirits of a nation and the three-man team behind it.

Charles Howard (Jeff Bridges) was a bicycle salesman who made his fortune in automobiles, but saw his only son die in a tragic mishap. Tom Smith (Chris Cooper) was a horseman who ended up a drifter after the stock market crash that precipitated the Depression. Red Pollard (Michael Angarano) lived with his well-to-do middle, class family, residing in a lovely home. All the family members loved to read, but Red’s love of horses and his rapport with them was obvious to anyone who saw him with a horse. After the Depression causes the Pollards to lose their home, Red’s parents leave him with a track owner, thinking Red would be better off as a jockey. It is, however, a rough life, and the adult Red (Tobey Maguire) is a wreck of a man and an alcoholic. Gradually fate brings the three hurt men together around one horse, as they try to help Seabiscuit reach the glory many thought would be his destiny by right of his lineage.

Seabiscuit is a curious film. It looks like a period piece and feels like a mini-epic, but the film is ultimately an emotional masterpiece. That simply means that the film brings forth the viewers’ emotions. You can feel the thrill of victory in your heart when the horse wins. When tragedy strikes or something bad happens to a character, you might also feel the sadness. You thrill, cheer, and cry, because you can feel along with the characters.

Director Gary Ross has written some very good films including Big (1988) and Dave, and he also directed the very charming Pleasantville. His best attribute is creating characters that breath, characters that make you care about them, so that you root for them, are happy for them, and are sad with them. When the viewer cares for the characters, they’re likely to buy into the movie.

Ross writes and directs a picture in which he makes nearly every moment riveting, both the quiet moments and the scenes of stadiums crowded with people anxious to see a horse race. It’s worth following the line of action because the drama is so entrancing. It’s enough to make you forget the times when the film feels too staged and its theatrics too over-the-top and posed.

The acting is all first rate. What else should we expect from a cast that includes such great character actors as Jeff Bridges, Chris Cooper, and William H. Macy, especially when they’re given a script with rich characters to perform? And Tobey Maguire seems to have impeccable tastes when it comes to choosing films (The Ice Storm, The Cider House Rules), so it’s a safe bet to see anything with him in it. Plus, his charming, boyishly good looks also have a kind of weary everyman quality, like a guy who has lived a varied and interesting life. Maguire just looks like he belongs in the films in which he stars.

In large measure, Seabiscuit is about redemption and about lives made whole again. It’s about people who feel abandoned and suddenly find other people who care about them or about the lonely finding groups to which they can belong. The film is less about feeling good and more about being able to get on your feet again. The film says that a person can overcome any obstacle, and Seabiscuit proclaims it so winningly.

Posted by Leroy Douresseaux at 1:18 PM