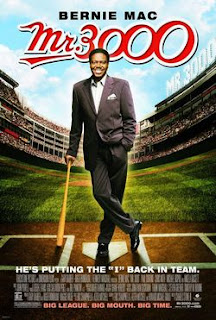 In 1995, Stan Woods (Bernie Mac) got his 3000th hit as a Major League baseball player, thereby (according to him) assuring him of his place among the immortals of baseball and guaranteeing him a spot in the Baseball Hall of Fame. Vain and jaded, Stan, however, retired in the middle of the same season and on the same day he got his 3000th hit. Nine years later, his reputation as selfish has kept him out of the Hall because the baseball writers (who vote on admission into the Hall) still don’t like him. If that weren’t enough, baseball officials suddenly disqualify three of the hits, for which he was apparently credited due to a clerical error. Woods now officially has 2997 hits, but he has been living it up as his business alter ego, Mr. 3000, merchandising himself and using the moniker for his business ventures.

Now, Stan wants back into the Major Leagues, and because his old team, the Milwaukee Brewers, is losing, Brewer ownership is glad to have him back. Mr. 3000 was and still is a fan favorite, but he’s returning as a 47-year old man who is way out of shape. His old manager, Gus Panas (Paul Sorvino), isn’t welcoming him back with open arms, because he and Woods didn’t get along back in the day. The current Brewers roster is filled with young players who don’t fully focus their attentions on the game. Also, an old flame, Mo (Angela Bassett), is now a reporter with ESPN, and she is very skeptical of Woods’ motives for returning, as is the rest of the press. Can Mr. 3000 get back in shape, earn Mo’s trust, relearn his childhood love of the game, and pass it on to a new generation of teammates?

Mr. 3000 is very similar to the baseball romantic comedy Bull Durham, except that the romance between Bernie Mac and Angela Bassett’s characters has more edge to it than the Kevin Costner-Susan Sarandon love fest of Bull Durham. Durham also had a great script; Mr. 3000 doesn’t. This film’s screenplay has all the markings of being something special, but it ultimately falls apart; I don’t know if this is because of studio interference or because the film was ultimately edited for time, but the writing fumbles at the one-foot line.

Good characters are introduced and dropped. Other characters hang around and aren’t properly utilized. However, the film’s most egregious error is trying to fit an adult comedy/drama/romance into the mold of being a light-hearted family baseball film. Mac’s character is a hardass, even more so than many people believe baseball superstar Barry Bonds to be. Mac, for that matter, is an R-rated personality who seems out of place in PG or PG-13 rated productions. Trying to make Mr. 3000 a family film is like trying to put Richard Pryor’s edgy act into a kids’ animated feature.

As badly as the romantic angle of this film is handled, the baseball part of this film is also betrayed. The filmmakers get the technical aspects of filming a baseball movie correct, but the spirit, flavor, and atmosphere of the game doesn’t come through as well as it should. And the story choice of having the team fighting to move from fifth place to third just doesn’t have the heat that having the Brewers chase a title would.

Mac and Ms. Bassett are great together and have excellent screen chemistry. They ably sell their screen couple’s troubled relationship – that the duo can love each other a lot but so irritate each other. To see a black actor and actress together in such a unique romantic entanglement is a treat. We already know that Ms. Bassett is a fine actress, but Bernie Mac also shows his acting chops. Hopefully, both will get better material in the future, but Mr. 3000, warts and all, is still worth seeing.