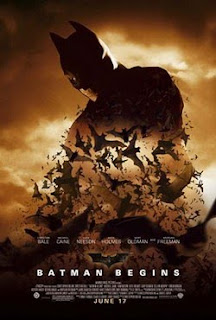 In Batman Begins, Bruce Wayne (Christian Bale) is tormented by guilt and anger over the death of his parents, Dr. Thomas and Martha Wayne (Linus Roache and Sara Stewart), killed one dark night by a common hood, when Bruce was a child (Gus Lewis). When he grew older, he became determined to fight injustice and fear and to also honor his parents’ altruistic legacy, so Bruce decides to educate himself in the ways of the criminal mind by traveling the world and mixing with criminals. Eventually, the mysterious Henri Ducard (Liam Neeson) mentors him in the mastery of the physical and mental disciplines. Ducard also offers Bruce a place in the League of Shadows, a vigilante group to which Ducard belongs and that is headed by the enigmatic Ra’s al Ghul (Ken Watanabe).

Bruce eventually returns to the city that he called home before his seven-year odyssey, Gotham, and finds it devoured by rampant crime and corruption. Wayne Enterprises, the business that his family has owned for generations, is about to make a public stock offering at the behest of it’s CEO, Richard Earle (Rutger Hauer), a man not interested in Wayne Enterprises’ history of serving the public good. Bruce’s close childhood friend, Rachel Dawes (Katie Holmes), is an Assistant District Attorney struggling to gain convictions against the city’s most notorious criminals and their scumbag crime boss, Carmine Falcone (Tom Wilkinson). Her efforts are often thwarted by Dr. Jonathan Crane (Cillian Murphy), a prominent Gotham psychiatrist who bolsters insanity defenses for Falcone’s thugs in return for his own favors.

But Bruce has a plan. He is developing a costumed alter ego, the Batman, based upon the things that frightened him most as a child, bats. With the help of the Wayne family’s long-time trusted butler, Alfred (Michael Caine), detective Jim Gordon (Gary Oldman) – one of the few good cops on the Gotham police force – and Lucius Fox (Morgan Freeman), his ally at Wayne Enterprises’ Applied Sciences division, Bruce unleashes the masked crusader Batman, who uses his strength, fighting skills, intellect, and an array of high tech weaponry to fight the sinister forces gathered to destroy Gotham.

In Batman Begins, the first film in the Batman movie franchise since the failed 1997 film, Batman and Robin and also a restart for the franchise, the acting is quite good. Christian Bale is superb as Bruce Wayne, a man who doesn’t yet have a thousand faces, but may eventually. Bale’s Bruce has grit and determination, but he suffers the imperfections and infallibilities of a man haunted by childhood fears and the deaths of his parents. He is a believable Bruce Wayne to whom we can attach our fortunes and through whom we can live vicariously as Bruce Wayne searches for the deeper answers to crime and punishment, justice, vigilance, and charity. Bale’s Bruce Wayne is Bruce played by an actor who takes the part of a comic book character and brings it to life through his art the way serious actors bring great literary characters to life.

Liam Neeson is magnetic and electric as the menacing, almost religious, leader Ducard. Neeson gives Ducard’s every word weight and gravity, which solidifies the character’s importance. Michael Caine is grandfatherly and matronly as Bruce’s loyal butler, Alfred, the best interpretation of the character in live action film to date. Morgan Freeman is sly and witty as Lucius Fox. Katie Holmes is scrappy, savvy, and smart as Rachel Dawes, a character who is too little in this film, but Ms. Holmes, like Neeson with Ducard, makes Rachel’s every word and scene count.

The directing by Christopher Nolan is good (but not as good as his debut Memento); the editing, photography, action sequences, costumes, art direction/set decorations, and locations are all tight-ass fine. However, the thing that makes Batman Begins good is the script by Nolan and co-writer David S. Goyer (the Blade franchise), from a story by Goyer. They treat the subject matter with seriousness that is tremendous, as if this comic book film should be adapted with all the somberness one would an acclaimed literary novel. Batman Begins is a summer film with meat on it; it’s eye candy that sticks in the mind and in the heart. The story is always engaging the thought process and appealing to the emotional side. Audiences probably won’t feel as if they just had a fluffy desert when they leave the theatre after seeing this. Batman Begins is a great romantic adventure, the kind that thrived in the 19th century and sadly died by the mid-20th century. Though Batman Begins drags on a few occasions, this enthralling film will remind some how good heroic tales can be and introduce others to the joys of romantic, heroic adventure.