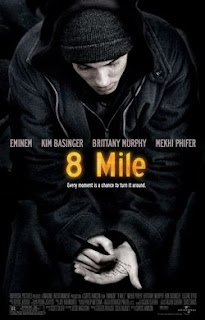 8 Mile became the first film to have a rap/hip-hop song win the Oscar for "Best Song." Directed by Curtis (L.A. Confidential) Hanson, the film stars mega popular rapper Eminem, and the film went on to be an enormous hit, much to many people’s surprise. It’s a strange film, part Rocky, part Flashdance, and part Purple Rain, with a star who is very controversial musical figure and who has angered any number of easily offended groups, including gay rights advocates and feminists. 8 Mile also seemed like a strange film for Hanson to direct, considering he’d won an Academy Award for co-writing L.A. Confidential and had also directed the critically-acclaimed, but largely ignored Wonder Boys. Besides, Hanson’s prior work had been so stunningly white bread, one had to wonder if he could direct a film with a very large black supporting cast and set in urban and hip-hop culture.

Eminem plays Jimmy “B-Rabbit” Smith, Jr., a down-on-his-luck blue-collar worker trying to find his place in the rap game. When he leaves his girlfriend (Taryn Manning), he moves into his mom Stephanie’s (Kim Basinger) trailer, but Rabbit doesn’t exactly see eye to eye with mom’s boyfriend, Greg (Michael Shannon), who went to school with Rabbit. Meanwhile, Rabbit’s homeboy, Future (Mekhi Phifer), is trying to get Rabbit to participate in the MC battles he hosts at a rundown club. MC battles pit two rappers against each other, each rapper getting under a minute to out rap and embarrass his opponent in front of an audience. Rabbit, determined to succeed at his dream, is caught between Future’s ideas about their respective paths to hip-hop glory and the plans of a smooth taking and ambitious hustler (Eugene Byrd) who promises Rabbit that elusive industry connection.

8 Mile is really a dark and depressing film. Rabbit and his friends are mainly poor, young men barely getting by each day; to a man, each one lives with his mother. They have bad jobs, and their neighborhoods are falling down around them. It’s quite stunning how Hanson went the direct path in depicting the squalid living conditions and the sense of hopeless that pervades their environments. Even when Rabbit and his friends are together having a good time, you can’t help but notice how decrepit their city around them is or how everyone seems to own old, rickety automobiles that last saw better days in the 70’s.

Hope seems strangled in this movie, and the film’s very dry story doesn’t help matters. The script is tepid and plotless, and the characters are shallow and simple-minded character types: the violent rivals, the mean boss at work, the pitiful alcoholic parent (Kim Basinger in a performance destined to become a camp classic), the underdog, etc. I especially despised Brittany Murphy as Rabbit’s ho friend, Alex; it’s a bad performance. All Ms. Murphy does in primp and preen, trying to make her character sly, knowing and witty, but only arriving at being whorish, cheap, and dishonest.

The film is decent, but it’s mostly listless and tiresome. Even if real life is like this, art plays with ideals, and a plot would have helped this film seem like it was going somewhere. Even if Rabbit doesn’t reach his goals in the movie, the film should end with a sense of hope, and here, the sense of hope is at best ambiguous. I like Eminem, but I found 8 Mile only somewhat entertaining. If you’re not a fan of his, there’s no reason to see this listless movie. The rapper doesn’t act; he simply pretends to be a character that sulks all the time.

If there’s one reason to see this film, then it’s the rap battle near the end when Rabbit decides to face down his rap enemies on stage. Finally, Eminem seems at home in this picture. He springs to life, smiling, grimacing, frowning, and leering, as the delivery of his arsenal of lyrics requires it. Although the MC battles are fairly energetic and quite hilarious, by the time they arrive, the film is so mired in dreariness that I’d really be reaching if I told you that rap music redeems this film.