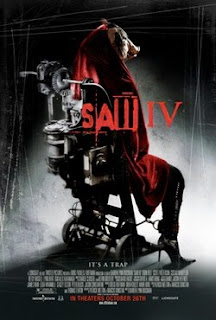 Meanwhile, SWAT Commander Rigg (Lyriq Bent), the last officer untouched by Jigsaw, is abducted and thrust into Jigsaw’s bloody game of bizarre death contraptions. Rigg has only ninety minutes to overcome a series of demented traps and his own obsessions to save his old friend Eric Matthews (Donnie Wahlberg), who is revealed to still be alive, or face the deadly consequences.

Saw IV has a huge twist that is somehow connected to Saw III, and it will only serve to enrich this fantastic horror/crime film series that borders on torture porn. In fact, IV is an upgrade on III. For one, whereas III seemed to be mostly about violence, gore, and sadism, IV is a suspenseful mystery/thriller that keeps the viewer on the edge of his seat in terror and keeps up the urgency to unravel the mystery. Secondly, IV finally offers the origin story of Jigsaw, and it’s a tightly written story within a story that is as poignant and tragic as many film dramas and as shocking as the best horror flicks. Thirdly, the ensemble cast is good, in particularly Lyriq Bent in his performance as the determined Rigg.

Saw IV is just as big as a gross out flick as Saw III, but this time we get an edgy thriller, a riveting mystery, and good filmmaking to go with the gleefully gory stuff.