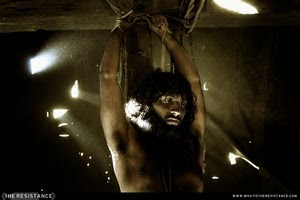 Starz Digital Media revolutionary new project, “The Resistance” came to life on Monday, October 4.
“The Resistance,” a science fiction action thriller, premieres on the SyFy October 4th 11:00pm ET/PT. In partnership with Starz Digital Media, series creator Adrian Picardi was able to take what was originally envisioned as a web-series and transformed it into a multi-platform launch. The Resistance was discovered by Aaron Lam of Sam Raimi’s Ghost House Pictures in 2008 when he found trailers of the then unproduced show on YouTube. Starz Media saw potential in the series and cleared the funding for the then 21-year-old Picardi to make 35 minutes, or the first installment.
Along with an hour-long premiere on the SyFy channel, “The Resistance” will be released on October 5th as a multi-episode web series for EST purchase on iTunes, XBOX Live, Amazon Video and The PlayStation Network.

The unique series is based in the fantastical world of Aurordeca. Syrus Primoris, a powerful chemist, has taken over the remaining population by keeping them alive with his miracle suppressant in exchange for total power. Lana (Spartacus’ Katrina Law) powerful leader of the Aurordecan Resistance Movement (ARM) is determined to find a new cure and free the people from Syrus’ suppression.

Check out the “The Resistance” trailer here and more background information at http://www.theresistanceseries.com/.