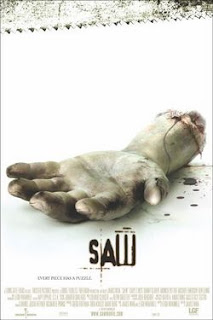 Would you die to live? Would you kill to live? Those questions are at the center of the horror film, Saw.

Two men, Dr. Lawrence Gordon (Cary Elwes) and Adam (Leigh Whannell), awake in dilapidated bathroom and face those very questions. The serial killer known as the Jigsaw killer abducted them. They’re chained to the wall across the room from each other with only notes and tape recordings leaving them instructions on how to survive. Gordon learns through his clues that he will have to kill Adam if he wants not only to save himself, but also his wife, Alison (Monica Potter), and daughter, Diana (Makenzie Vega), whom the Jigsaw killer has abducted and whom Jigsaw will slay if Gordon doesn’t kill Adam before the deadline. Meanwhile, a policeman, Detective David Tapp (Danny Glover), obsessed with discovering the identity of the Jigsaw killer, is watching Gordon’s home.

Some professional film critics compared the 2004 Halloween horror hit, Saw, to a grisly film version of the popular reality series, “Fear Factor.” The film is on occasion shockingly grisly, but Saw is something rare in American filmmaking – the horror film as a mystery thriller. For all its gore, Saw is mystery that like great whodunits asks many questions around one central question. If the audience is fixated on Lawrence Gordon and Adam’s predicament, it must also contend with who, what, when, why, and how.

Quite a bit of Saw is also told in flashback, and that’s a double-edge sword. The flashbacks and take the edge out of a very edgy movie, but at the same time, these flashbacks answer so many questions while intriguing the audience by raising more. Simply put: the acting, directing, writing, and production (the film was shoot and cut in 18 days) are well done in service of this film. It’s all smartly geared to created a horror movie that engages the mind, sends chills down the spine, makes us turn away, and stunningly reminds us what people will do to survive.

Posted by Leroy Douresseaux at 8:30 AM