Sherlock Holmes Was Fresh for the Twenty-Oh-Nine 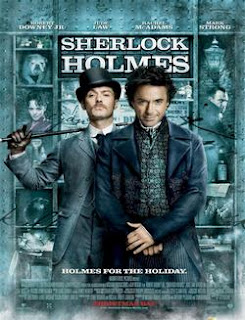 At Christmas 2010, the film Sherlock Holmes brought Sir Arthur Conan Doyle’s famous detective back to the big screen. This new film features a Sherlock Holmes and Dr. Watson that are different from the most famous screen Holmes and Watson, actors Basil Rathbone (as Holmes) and Nigel Bruce (as Watson). Directed by Guy Ritchie, this Christmas 2009 Sherlock Holmes is something of an in-your-face buddy movie that is more event movie entertainment than it is detective film, but what fun it certainly is.

Sherlock Holmes (Robert Downey, Jr.), the renowned "consulting detective,” has made his reputation finding the truth at the heart of the most complex mysteries. That includes a recent case in which Holmes rescued a kidnapped young woman from the clutches of the murderous occultist, Lord Blackwood (Mark Strong). Without a new case, Holmes is bored and also fretting over the impending marriage of his trusted ally and physician, Dr. John Watson (Jude Law) to Mary Morstan (Kelly Reilly).

Then, a new storm gathers over London, one bringing a threat unlike anything that Holmes has ever confronted. Although hung from the gallows for a string of brutal, ritualistic murders, Lord Blackwood has reportedly returned from the dead. Seemingly connected to dark and powerful forces, Blackwood launches a plot to change the British Empire forever, and his apparent resurrection has sent London into a panic. Somehow, Irene Adler (Rachel McAdams), a woman from America with whom Holmes has a tempestuous relationship, is also involved in this madness. Holmes may have found just the challenge he has been looking for.

Dynamic would be a good way to describe Guy Ritchie’s Sherlock Holmes. Everything well-mannered and traditional about Sherlock Holmes has been redone as rowdy and fast-paced. This primordial classical mystery has become the classic, loud, Hollywood blockbuster, event motion picture, and there’s nothing wrong with that. Sherlock Holmes satisfies, going down like a Big Mac when you’re especially hungry (and you don’t remember them tasting so good). Writer Lionel Wigram, who received a “screen story” credit for this film, is actually the writer who fashioned this reinvention of Sherlock Holmes. Wigram merely emphasized Holmes’ less social tendencies and his martial arts prowess (both part of the original Holmes stories). Is there a better way to re-imagine a Victorian era character for modern movie audiences than as a smart ass outsider who kicks ass?

Robert Downey, Jr. and Jude Law make this movie. Of course, Downey plays the venerable sleuth as a master of deduction who sees what is invisible to everyone else. Downey’s Holmes also engages in heart-stopping, bare-knuckle brawls, dodges explosions that would kill most, and leaps from buildings like a mad acrobat. This is Holmes as Indiana Jones, a crowd pleaser and man of the people. With a wink and a nudge, this Holmes is scruffy and frumpy, and you will not see him in a coat and tie – and forget about the deerstalker hat.

Jude Law’s genial Dr. John Watson is smart, has an eye for detail, and banters with Holmes as if the duo were an old couple. Law’s Watson, however, hides a thug beneath the whimsical, at-ease nature, and he looks as if his nice suit really hides a pair of brass knuckles and a blackjack.

Sherlock Holmes is not without its problems. One of them is that the director and the writers are so in love with their nouveau take on Holmes and Watson that they lose Lord Blackwood, an intriguing adversary whose potential is wasted. Ultimately, this film is like National Treasure with a Victorian James Bond, but is still Sherlock Holmes. Like many holiday crowd-pleasers, it is indeed forgettable. You will, however, remember that it was fun to watch, enough to want to see this Sherlock Holmes movie again – perhaps even enjoy repeated viewings on its eventual home, cable television.