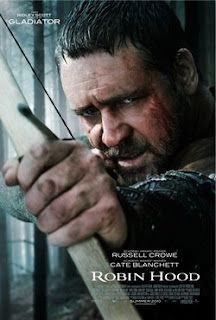 Back in 2000, Ridley Scott unleashed his Roman costume drama/action movie, Gladiator. The film was a big box office hit and turned its lead, Russell Crowe, into a major movie star. Gladiator went on to win several Academy Awards, including “Best Picture” and a “Best Actor” Oscar for Crowe. Scott and Crowe have worked together since then, but those films have not been as successful as Gladiator.

Scott and Crowe distilled the manly man of honor essence of Gladiator and put it into their recent film, Robin Hood, but this movie is not like other Robin Hood movies. The Scott/Crowe Robin Hood isn’t a reinvention or re-imagining or anything like that. It is a kind of prequel, essentially asking the question of what would have turned a man into an outlaw like Robin Hood. This is the story of how, when, and why Robin Hood came to be, and the story goes like this…

It is 1199, and as the Third Crusade comes to an end, Richard the Lionheart (Danny Huston) continues his war against Philip II of France (Jonathan Zaccai). In the siege of Chalus Castle, Robin Longstride (Russell Crowe) is a common archer. Following the death of Richard, Robin and two other common archers, Alan A’Dale (Alan Doyle) and Will Scarlet (Scott Grimes), and the soldier Little John (Kevin Durand) make an attempt to return home to England after 10 years away. The quartet arrives at the site of an ambush of the Royal guard. There, Robin makes a promise to a dying knight, Robert Loxley (Douglas Hodge), to return a sword to his father, Sir Walter Loxley (Max von Sydow), in Nottingham.

Impersonating Loxley, Robin returns to England to find the land beset by the ill rule of Richard’s brother, now King John (Oscar Isaac). Robin and his companions travel to Nottingham where he meets Loxley’s now-widowed wife, Lady Marian (Cate Blanchett), and Sir Walter, who is old and blind. Walter asks Robin to continue to impersonate his son in order to keep his family lands from being taken by the crown for taxes. In fact, Prince John sends his henchman, Sir Godfrey (Mark Strong), an English knight secretly aligned with the French, across England to collect taxes from everyone by any means necessary. Robin fights back, but soon discovers that England has bigger problems than out of control tax collectors. Now, Robin Longstride must lead the fight to save the country.

Robin Hood is a rousing adventure combat movie. It isn’t Ridley Scott’s best work (or anywhere near that), nor is it Crowe’s best work. Neither, however, seems on automatic. Crowe is a superb actor and consummate craftsman; it may seem as if he is in cruise control mode here. Crowe just makes it look easy, and perhaps, Scott does the same in this movie. The truth is Robin Hood is very well made and quite entertaining, except for a small dry spell in the second hour of the movie.

Perhaps, it is easy to take this film and the people behind it for granted. I marveled at the high-quality performances throughout. Cate Blanchett gives a strong turn and fashions a forceful character out of the well-worn, almost stock character, Maid Marian. Mark Strong is, as usual, strong as the villain – in this case, the conniving Godfrey, and Oscar Isaac is award nomination-worthy for his creation of the unashamedly jealous King John.

I thought of Gladiator and Braveheart while watching this new take on Robin Hood. I certainly like its depiction of how lowly, common men sacrifice their lives and spend years away from their families to fight wars started by a small circle of vain royalty. After expending so much blood and sweat, they get nothing in return and even have to fight to find a way home on their own. That much is relevant to our modern times. Scott, Crowe, and screenwriter Brian Helgeland get it right. That injustice is reason enough to turn a man into an outlaw, and reason enough for me to enjoy Robin Hood.

Posted by Leroy Douresseaux at 9:51 PM