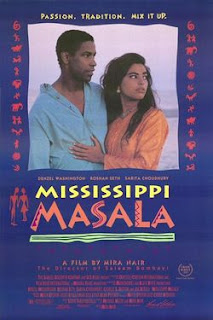 When Edi Amin takes power in Uganda in 1972, Jay (Roshan Seth), a Ugandan of Indian descent takes his wife Kinnu (Sharmila Tagore) and daughter Mina (Sarita Choudhury) into exile. They eventually arrive in Greenwood, Mississippi and some time passes.

In the early Nineties, Mina falls in love with Demetrius Williams (Denzel Washington), a black man who runs a small carpet cleaning business with his brother Tyrone (Charles S. Dutton). What follows is the story of the difficult time that Mina and Demetrius’s families have dealing with the mixed relationship. At the same time, Jay longs for his homeland of Kampala, Uganda and pursues a lawsuit through a post-Amin government to regain the property he lost when Amin expelled Asians and non-black Africans from Uganda.

In Mississippi Masala, director Mira Nair (Salaam Bombay!) weaves a passionate, literate affair that slowly draws the viewer from a Uganda of rich, vibrant colors to a Greenwood, MS of heavy, earthy tones. She allows her prodigiously talented cast to do their thing, and they certainly take to it.

Washington is, as expected, very good. He is a sullen, cheeky fellow who quickly becomes smitten with the beautiful Mina after initially using her to spite his ex. Ms. Choudhury, who is sadly rarely seen in movies, possesses a face rich in its display of emotions. However, behind the husky, dark brown face is a mysterious pool of thoughts and feelings that one must brave to completely enjoy the experience of viewing her acting gifts.

Roshan Seth (Gandhi, A Passage to India) as Mina’s father Ray is also good; he is subtle even when he must be angry and passionate. The viewer can feel his pain and longing for his homeland. He is the bridge in the present from the past to the future, and he is the emotional center of the film. So good is he, that you will feel that you have to cry along with him when he cries, and you will struggle with him as he finds his way when he is lost.

A soundtrack that covers Hindu music, African songs, and the delta blues and soul flows through this film like a gentle breeze. It is a wonderful accompaniment to Taraporevala’s novel like script, which deals with its characters as if the film was a novel and had all the time in the world. It is only a slight problem that there are too many good characters. Taraporevala created such wonderful characters rich in back story, and he only has time to give us a small taste of most of them.

Taraporevala and Nair also make not too subtle comments on race and ethnicity. White folks are only minor characters in the film. They mar their brief appearances with their ignorance and racism. Even the poorest, trashiest whites in the film take on an air of superiority to any non-white they meet in the film. At one point, a loan manager at a local bank lectures Demetrius and Tyrone on how far hard work has gotten him, the loan officer, when it is clear that he hasn’t worked a hard day in his life, and. If he has, he has probably never known the struggle and disappointment that Demetrius and his brother have faced.

The “masala” of the title is an Indian dish composed of colorful spices, and the multi-national, multi-ethnic cast is just like that. The small servings that we get of most of them are indeed spicy and leave us longing for more.

This film only gets better with age, and leaves you always wanting more. One of the best films of its time, it is worth repeated viewings. Mississippi Masala is a thinking person’s film with an eye on telling a story to which anyone can relate – love so strong that no opposing forces are strong enough to dispose of it.