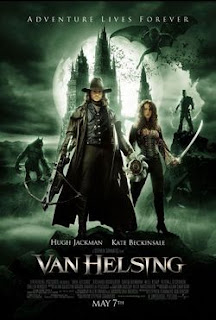 The film Van Helsing is set in the late 19th Century. Count Vladislaus Dracula (Richard Roxburgh) plots to use Frankenstein’s Monster (Shuler Hensley) to bring his brood of thousands of baby vampires (incubating in eggs) to life. The sole surviving member of the Valerious Family, Anna Valerious (Kate Beckinsale), has pledged to stop Dracula. Before the last Valerious dies, he or she must kill the Count because that is the only way the family’s souls will ever know salvation. If that wasn’t pressure enough for the valiant Anna, her brother has been transformed into a werewolf who serves Dracula.

Enter Van Helsing (Hugh Jackman), a no-nonsense warrior with no time for a pretty woman fighting monsters, but Van Helsing and Anna are soon bound by combat. Dracula, however, has a surprise for the famed monster hunter; he knows Van Helsing’s first name, plus, a whole lot more, and he’s offering Van Helsing peace of mind and his memories back, if only he’ll join the Count.

Stephen Sommers, who made his rep when he remade The Mummy into a successful franchise in 1999 and 2001, is a master of making thrilling, high grade, high tech, low brow monster movies. When he uses his favorite ingredients of special effects and CGI in the correct amounts, his films are quite fun, as is the aforementioned, The Mummy. When he just piles it on, the film is nothing more than a really cheesy creature flick, like the old black and white kind in which the monster is so painfully, obviously a man in a poorly made rubber suit. The creature in Sommer’s Deep Rising, an entertaining B-movie, was what has become the modern day rubber suit – overdone CGI that screams out that it’s fake.

Van Helsing falls in the cheesy category. It’s too much, too over the top, and too damn loud. More reliant on SFX than on plot or story, the film isn’t a motion picture, but it is a 3-D animated proposal for theme park rides and video games. The plot is a ludicrous excuse to get Dracula, Frankenstein’s Monster, and a werewolf together. Van Helsing isn’t entirely awful. It does have some good moments, but when it comes down to it, the film is more annoying than fun. It’s spectacular and spectacularly dull.

I was sadly surprised that minutes into Van Helsing I realized that the film was going to be two things: ponderous and shrill. And it’s so swollen with CGI and other SFX, that it’s an embarrassment of riches – like a French nobleman too clueless to realize that maybe he should play down his wealth in front of the club-wielding mob.

Hugh Jackman’s Van Helsing isn’t nearly as interesting as his Wolverine from the X-Men movies, and Kate Beckinsale is lost in a giant fright wig and too-tight clothing. Richard Roxburgh’s cool Dracula is also wasted on this poor film.