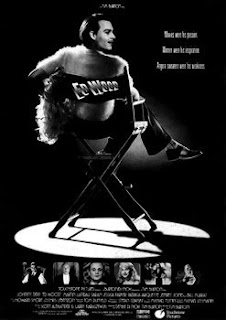 Martin Landau won an Oscar as Best Supporting Actor for his role in Tim Burton’s Ed Wood, a biopic of the legendary director of such “awful” movies as Plan 9 from Outer Space and Glen or Glenda. A box office flop when it was released on Halloween night in 1994, Ed Wood still earned rave reviews and today is a fan favorite amongst many movie buffs. At the time, it was Tim Burton’s best directorial effort since Beetlejuice (1988) and since that film, he has not made another film that is closer to the spirit he showed in his early works.

Edward D. Wood, Jr. (Johnny Depp) wanted to be a great filmmaker, but probably lacked the talent and skills, if not the vision, to be one. Just before his career kicks off in the early 1950’s, Wood meets the infamous Bela Lugosi (Martin Landau) best known for starring in horror films, and especially for his trademark work, the 1931 film version of Dracula. Lugosi, a heroin addict on the tale end of his career and financial strapped, joins Ed Wood’s gang of merry idiots, outcasts, and weirdoes to make three truly awful films. Ed Wood and the elder thespian become close friends as Wood struggles to finance his pictures.

It’s difficult to find fault with Ed Wood, as pretty much everything about the film is top notch, from the wonderful art direction and costumes to Howard Shore’s magnificent score. Cinematographer Stefan Czapsky’s glorious black and white photography remains one of the best examples of black and white film used as an artistic choice in the last quarter century.

Ed Wood claims to be a mostly true story of Wood the filmmaker, but Burton’s intent here is what his intent is in many of his films – to tell the uplifting story of the outcast, outsider, weirdo, or nonconformist who struggles to do his own thing in spite of what normal society says. The script, by biopic experts Scott Alexander and Larry Karaszewski (The People vs. Larry Flynt and Man on the Moon), takes a naïve, idealistic, and ultimately light-hearted approach in examining people who do really bad work, but who have the best intentions. The writers don’t, however, play everything as happy-go-lucky because the story depicts an awful lot of frustrations in the way of Wood and his crew.

Stylistically, Burton takes the approach of making Ed Wood look like a camp picture. Shot in black and white, the film’s style is almost as farcical as Wood’s filmography. Perhaps, it was best for Burton to make his film as off-kilter as his subject, and it worked. Biographical films face many obstacles; being boring and preachy or making saints and martyrs of their subjects are the worst sins of biopics. Ed Wood, however, is fun, surreal, and fantastical, and Burton sees the world through the eyes of a harmless madman who wanted to make great movies and made painfully bad pictures. This is a bold creative move on Burton’s part, the kind of adventurous and imaginative choices that he doesn’t always make. The Hollywood machine often eats the brilliance out of this visionary filmmaker.

Wood is also full of wonderful performances. Besides Landau’s Lugosi (for which he received numerous awards), Depp shows that he is every bit the wild spirit that his frequent collaborator Burton is. Depp’s Wood wears a kabuki mask of campy zaniness, but Depp also plays the character with such depth that how can we not help but take Wood seriously as a serious filmmaker even when we know he makes crap? Bill Murray for his wily and self-effacing performance and Lisa Marie for playing Vampira as a staid, ticking, sex bomb also deserve notice. Along with everybody else, they make Ed Wood a rare cinematic treat, an oddball movie about an oddball filmmaker. Ed Wood is hilarious, and is finally a deeply moving picture about the quest to share one’s dreams with the world.