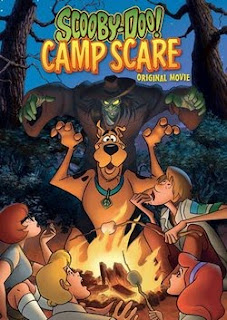 Beginning in 1998 with Scooby-Doo on Zombie Island, Warner Bros. has released direct-to-video animated movies based on the Scooby-Doo cartoon franchise. There has been at least one per year (except for 2003 and 2005, when two movies were released in both years). Scooby-Doo! Camp Scare is the 15th in this direct-to-video series.

Burt and three newly-arrived campers: Trudy (Tara Strong), Luke (Grant Goodeve), and Deacon (Mark Hamill) stick it out. They join Fred, Daphne, Velma, and (reluctantly) Shaggy and Scooby in trying to solve a wide-ranging mystery that revolves around Camp Little Moose. But the Woodsman and his spooky cohorts are ready to deliver bodily harm if they don’t leave.

After the back-to-basics approach of Scooby-Doo! Abracadabra-Doo, this Scooby-Doo animated movie series has new life. The main characters are back to wearing their original outfits, and the two most recent films are just as fun and enjoyable as the 1969 series that started it all, Scooby-Doo, Where Are You! The ghost chasing, mystery solving, and action comedy is as good as ever.

Camp Scare, like Abracadabra-Doo, reveals differences from the original Scooby-Doo cartoons. Now, the ghosts, monsters, and general supernatural adversaries are darker and edgier. They certainly act as if they would like to seriously hurt (if not kill) the Mystery Inc. gang and the other good characters. Daphne’s attraction to Fred is more obvious than ever, and she is openly jealous of and hostile to rivals for his attention and affection. Velma is a little more taciturn and sardonic, but she is also more aware of what other people think and how they feel. Shaggy and Scooby are happily still the same – always looking for a meal and a way out of ghost chasing.

Scooby-Doo! Camp Scare is not only classic Scooby-Doo; it is also simply good. Very well done with quality animation (especially the beginning and end credits), it is honestly a must-see for fans of Scooby and the gang.

The Scooby-Doo! Camp Scare DVD has two extras. First, in “Scooby-Doo! Spooky Camp Stories, an actor telling campfire stories. The second extra is “Beware the Beast From Below,” the pilot episode of the new series, “Scooby-Doo! Mystery Incorporated.” The gang takes on a slime mutant that lives in the caves below Crystal Cove, the hometown of the Mystery Inc. gang. They also encounter their new nemesis, “Mr. E.”