Review: Baz Luhrmann's "Moulin Rouge!" is Half Brilliant, Half Ridiculous 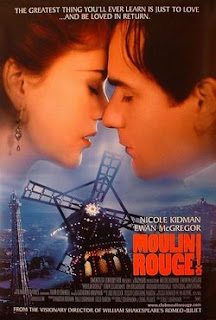 Christian (Ewan McGregor), an impoverished young poet from Scotland, arrives in Montmarte, France and falls in with a group of Bohemians led by Henri Ramone de Toulouse-Lautrec (John Leguizamo), against the wishes of his father. Like the young poet, the Bohemians believe in freedom, truth, beauty, and most of all love, and they want to stage a show in the legendary Moulin Rouge, the home of the Paris’s colorful and diverse underworld where the wealthy rub shoulders with the working class, artists, bohemians, actresses, and courtesans.

Harold Zidler (Jim Broadbent, Iris), the impresario of the Moulin Rouge, wants a backer so that he could turn his haven of sex and drugs into a proper theatre. His wealthy quarry is The Duke of Monroth (Richard Roxburgh) who is willing to give the money for the renovation, but, in return, he wants for his possession the Moulin Rouge’s most popular attraction, the beautiful courtesan and the stuff of which dreams are made, Satine (Nicole Kidman). The stop in Zidler’s plans and in the Duke's desires comes in the form of Christian. He becomes the playwright of the show that would transform the Moulin Rouge, and he falls hopelessly in love with Satine, much the chagrin of the vindictive Duke.

Directed by Baz Luhrmann (William Shakespeare’s Romeo and Juliet), Moulin Rouge! is an extravaganza of modern popular music, flashing lights, sumptuous sets, colorful costumes, and dazzling production numbers. Like the title of the Bohemians’ play that Christian composes, Moulin Rouge! is a “spectacular spectacular.” As beautiful and as breathtaking as everything is, Moulin is more about visual noise than it is about visual storytelling.

At some moments, the cacophony of music and songs intertwined like drunken snakes is quite nice, at other moments, it is a melding of pretension, misfires, and nonsense. However, even in those moments excess, Moulin Rouge! remains engaging and beautiful. Even when you’re bored, you can’t take your eyes away from the gorgeous sights, nor can your ear not seek out the secrets of the sonic mélange. The cinematography (Donald McAlpine who also worked on Luhrmann’s Romeo) captures the rich palette with the flare of a romantic classical painter. Production design (Catherine Martin), art direction (Ann-Marie Beauchamp), and set decoration (Brigitte Broch) are not only some of the best of the year, but some of the best ever.

Kudos to the actors for maintaining their crafts amidst the energy of Luhrmann’s film. Ms. Kidman has never been more beautiful (and she is always beautiful), her face a luminous globe in Moulin Rouge!’s dance of colors. She is a swooning siren, an intoxicating temptress, and gorgeous martyr. Ewan McGregor is the young poet eager to teach the world his overriding belief in truth, beauty, freedom, and love, but he is able to turn jealous and angry at a moment’s notice. It is in his face that we can see the overwhelming optimism of “love conquerors all: that seems to be a theme of this film. Even in sadness, there remains in young Christian’s face, the strength of love.

Moulin Rouge! is in its execution meant to be a cinematic experience like no other. That it is. It seeks to overwhelm the viewer with sound and images, though the images and sounds are often static and junk. It looks so good on the screen, and the movie moves madly about the screen. It loses the story amidst the sound and the spectacle, so sometimes it seems nonsensical. Moulin Rouge! tries the patience of the viewer, and the film hints that it could have been something more. Better luck next time.