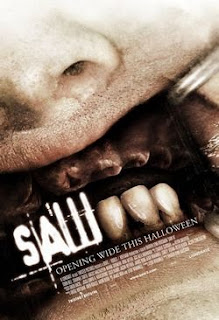 HORROR with elements of drama

The Jigsaw killer (Tobin Bell) and his apprentice, Amanda (Shawnee Smith), are still subjecting hapless victims to their cruel, sadistic, and intricate games of death. While city detectives frantically hunt for them, they’ve chosen two new pawns, the detached and clinical Dr. Lynn Denlon (Bahar Soomekh), and Jeff (Angus Macfadyen), a grieving father obsessed with getting revenge for the death of his young son.

Saw III, of all the Saw films, may delve most deeply into the psychology of both the game masters and their “players.” However, for all its attempts at discovering the reasons and rationales for the characters’ actions, Saw III is listless, although it is as gory and gross as the previous movies. Watching the characters desperately fight to escape the mega sadistic contraptions Jigsaw and Amanda have prepared for them (there’s a twist here) is painful – ready-made to cause viewer squirming and flinching. But the whole gruesome exercise seems as dull and as unappealing as harvesting belly button lint.

Most of Saw II’s crew has returned for Saw III, including director Darren Lynn Bousman and screenwriter Leigh Whannell (who based Saw III’s script on an idea by original Saw director James Wan), but they couldn’t rebuild the fire they started for Saw II. The production values are also of lesser quality. The set looks like a rundown mechanic’s garage, and the cinematography is dull and poorly lit even for a horror flick. The acting amounts to sneers, hard stares, hollering, and over-emoting. Hardcore gore attics (and Saw fanatics) may very well find much in this flick to love, but if it weren’t for the scene with the puréed putrid pigs, Saw III wouldn’t have a single memorable moment.

Posted by Leroy Douresseaux at 8:12 AM