Paranormal Activity 2 Does Not Disappoint 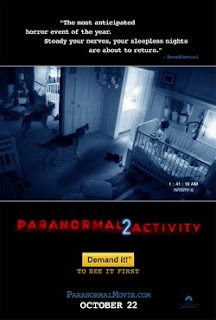 It was film festival attendees who first saw, in 2007, the ultra-low budget, psychological horror film, Paranormal Activity. Eventually, well-connected and influential Hollywood types (like Steven Spielberg) saw the film, and Paranormal Activity got a nationwide theatrical release in October 2009, going on to become a box office hit.

Paranormal Activity 2 focuses on the home and family of Kristi Rey, the sister of Katie from the first film. Kristi is married to Dan, who is a widower with a teenaged daughter, Alli. Kristi and Dan have just welcomed a baby boy, Hunter, into their happy home. Martine, a Hispanic housekeeper and nanny, lives with them, as well as Abby, the family’s loyal German shepherd.

Paranormal Activity 2’s action begins 60 days before the death of Katie’s boyfriend, Micah, which happened in the first film. After an apparent break-in and vandalism of their home, Dan has a number of security cameras installed inside and outside the house. The cameras begin to record unusual, even weird activity. Martine and eventually Kristi and Alli begin to suspect that they are not alone in the house. Something is vexing them all, especially Hunter.

The last half hour of this film, however, is riveting and absolutely chilling. I think my heart was indeed trying to find a hiding place in my throat, and, as I write this several hours after seeing the movie, I’m still thinking about it. Paranormal Activity 2 lives up to the hype and the original film.