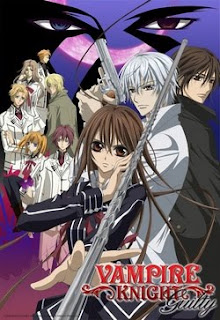 VIZ MEDIA ANNOUNCES THE SECOND SEASON OF THE HIT VAMPIRE KNIGHT ON VIZANIME.COM, VAMPIRE KNIGHT GUILTY
VIZ Media announces the debut today of VAMPIRE KNIGHT GUILTY, the second season of hit VAMPIRE KNIGHT animated series (both rated ‘T+’ for Older Teens) available now from VIZAnime.com, the company’s premier website for anime, as well as the streaming content provider HULU (http://www.hulu.com/).
Cross Academy is attended by two groups of students: the Day Class and the Night Class. At twilight, when the students of the Day Class return to their dorms, they cross paths with the mysterious Night Class on their way to school. Yuki Cross and Zero Kiryu are the Guardians of the school, protecting the Day Class from the Academy's dark secret: the Night Class is full of vampires!
In VAMPIRE KNIGHT GUILTY, Yuki is torn between the two people she cares for most when Zero is accused of Shizuka Hio’s murder and Kaname refuses to attest to his innocence. Drawn deeper into the world of vampires, Yuki struggles to recall the events of ten years earlier but fails time and again. Kaname evades Yuki’s questions about the past, but when her visions of blood grow more frequent and intense, the past may come to light whether she wants it to or not!

VAMPIRE KNIGHT and VAMPIRE KNIGHT GUILTY are based on the best-selling manga series created by Matsuri Hino (rated ‘T+’ for Older Teens and published by VIZ Media), who burst onto the scene in Japan with her debut title, Kono Yume ga Sametara (When This Dream Is Over) in LaLa DX magazine. With the success of subsequent series such as CAPTIVE HEARTS and MERU PURI (both also published domestically by VIZ Media), Hino has firmly established herself as a major force in the world of shojo manga. VAMPIRE KNIGHT is currently serialized in LaLa magazine in Japan.

Posted by Leroy Douresseaux at 10:46 AM