Hostel was Trash Cinema with Imagination 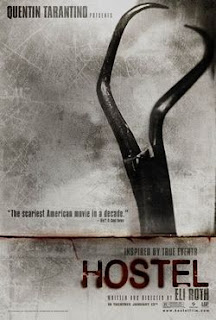 Two American college students, Josh (Derek Richardson) and Paxton (Jay Hernandez), on the verge of grad and law school respectively, take a tour of Europe hoping to make the kind of wild memories they can vividly recall while doing the serious business of being grown up. With, Oli (Eythor Gudjonsson), a European friend they meet in Barcelona, they travel to the Netherlands where they hear of a town in Slovakia where the women are horny for American men because all their own men were killed in one of the various civil wars that began after the fall of the Soviet Empire. Josh, Paxton, and Oli make the trip and find a hostel (a college dormitory style hotel for young people, which is usually supervised) in an out-of-the-way Slovakian town that is indeed stocked with European women hot for American men. However, there is something dark, brutal, and very ugly just beneath the surface of the easy sex.

Many film fans considered Eli Roth’s horror film, Cabin Fever, to be problematic, but they believed that it showed much promise for Roth’s future as a director of horror films. That promise is supposed to be met in Roth’s new horror film, Hostel. As far as I’m concerned Cabin Fever had problems, but was one of the best and truest horror films in the last decade. Hostel is actually a step back.

The film is gallows schlock, the kind of gory film a frat boy would make. In fact, the two American lead characters are not only spoiled college students, but are also the kind of dumb Americans who think every backwoods, exotic, international locale is just another place to score girls and indulge in super hedonistic behavior. The only thing that makes them sympathetic is that they are Americans, and since we can see their doom coming from ten miles away (while they apparently can’t see it a few feet in front of them), we can be sympathetic because we as Americans wouldn’t want to be trapped in a strange foreign place with no cavalry, let alone an American embassy, there to save us.

The film, like even the worst horror movies, at least succeeds in creating creepy atmosphere and a fine impending sense of doom that pervades the film’s first half hour. The film features nine foreign languages, none with subtitles – a record for an American film without subtitles, and that actually adds a nice touch to the film’s surreal and strange mood. However, the narrative itself is dull, and the gore shamelessly gruesome and overdone; it makes Rob Zombie’s flicks look mainstream. Hostel is also somewhat misogynistic. Women in this film are either flesh pots into which the Americans can insert their genitalia, or they’re skanky Euro-whores screwing, drugging, and lying men to their dooms – kind of like a heifer leading the bulls into the slaughter pens.

The film does have a redeeming quality – the last act, in particularly the last twenty minutes. At that point Hostel transforms itself from pornographic gore into a brilliant European chase flick. It’s taut, edge-of-the-seat pace is filled with moments of comic horror, just enough to make you laugh off the tension. Still, that’s not enough to make Hostel more than a DVD rental.

Posted by Leroy Douresseaux at 12:48 PM