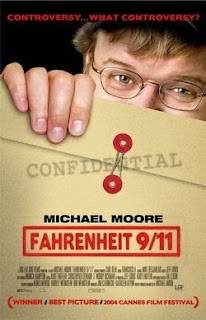 His detractors have called documentary filmmaker Michael Moore everything from a polemist to a propagandist. The Oscar® winning director (Bowling for Columbine) is the best known American documentary movie maker, even better known than such acclaimed talents as Ken Burns and Errol Morris. In the late spring of 2004, Moore debuted is most controversial work to date, Fahrenheit 9/11, in which Moore aims his camera squarely at the administration and policies of U.S. President George W. Bush.

Fahrenheit 9/11 details the connections between the Bush family and various Saudi Arabian oil interests, especially the bin Laden family – ironic considering that Bush and the bin Laden family member who is the alleged architect of the September 11, 2001 attacks on America, Osama bin Laden, are now mortal enemies. The film also takes a look at what happened after 9/11/2001, and how the Bush administration used the tragic event to push its agenda. Moore’s claims include accusations that Bush family and business associates have greatly benefited monetarily from the subsequent wars in Afghanistan and Iraq through government military and petrochemical contracts. Fahrenheit 9/11 later takes a look at the affects of combat in Iraq on the soldiers and Iraqi citizens, and Moore interviews Lila Lipscomb, a proud and patriotic mother whose son dies in Iraq.

Unlike Moore’s films, Roger & Me and the aforementioned Columbine, Moore, as a character, does not make many on-screen appearances in Fahrenheit. Fahrenheit 9/11 is more focused than the Academy Award-winning Columbine because Moore has to spend a great deal of the film detailing his arguments, especially in the film’s first half. The first hour or so of Fahrenheit 9/11 is where Moore makes his arguments that George Bush and his cronies and administration used the war to enact government and social policies that they wanted to force on Americans all along and that the terrorist attacks on the U.S. gave them the opening they needed. Moore claims that ultimately the war in Iraq was more about the Hand Puppet’s administration’s desire to make money than protecting the U.S. What makes Michael Moore’s argument convincing is that he culls so much archival news footage, photographs, and video from recent news conferences. Thus, the subjects of his film do the vast majority of the talking and inadvertently convict themselves and prove Moore’s points.

The first half of Fahrenheit 9/11, when it focuses on George Bush, is outrageous and hilarious. Michael Moore has the gift of being both subtle and blunt when it comes to humor. His satire has the precision of a scalpel, and he presents arguments with the blunt force of a fist; he is brutal and relentless. Considering how so many Hollywood directors of comedies now rely on childish gross out jokes to sell their “humor,” Moore is likely the smartest film director of humor in America. He uses President Bush and his associates like hapless sock puppets for his jokes, all the while he expertly delineates their follies.

The second half of Fahrenheit 9/11 is a bit of a downer, as Moore takes his camera to Iraq to interview soldiers. He also interviews a soldier’s mother from his hometown of Flint, Michigan. Although many critics have claimed that Michael Moore portrayed the American servicemen and servicewomen as villains, I found that to be otherwise. The little time the soldiers are on camera, Moore shows warts and all, but the soldiers come out looking like humans and not killing machines. They make mistakes and do ugly things, but Moore shows them as the heroes – guys and girls just doing their jobs. If the job is wrong, it’s not by their hands, but it’s on the people who sent them there.

The other segment of Fahrenheit 9/11 that’s really hard to watch is Moore’s time spent with Lila Lipscomb, the mother of a slain soldier. His camera takes such an intimate look at her life surrounding her son’s service in Iraq that when tragedy strikes, the viewer also feels the pain.

As good as Moore is at making documentaries, he also uses film to make commentary, and he uses film as if he were an essayist. He’s also part of that other group of journalists, reporters, storytellers, etc. who go beyond the safe borders where mainstream American media won’t go. Michael Moore just happens to be the loudest source of alternative information concerning politics and society, and Fahrenheit 9/11 may be his most accomplished work. Still, it’s by no means perfect; sometimes the film looses focus (as during his visit with two Oregon state troopers). However, Fahrenheit 9/11 is a sign of even greater things to come from Moore, and it’s one of the best films of the year.