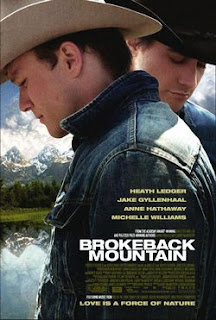 Two young men: Ennis Del Mar (Heath Ledger), a ranch hand, and Jack Twist (Jake Gyllenhaal), a rodeo cowboy, meet in the summer of 1963 while shepherding sheep on Brokeback Mountain in Wyoming. They unexpectedly fall in love and form a lifelong connection. At the end of the summer, they part ways. Ennis remains in Wyoming and marries his girlfriend, Alma (Michelle Williams), and they have two daughters. Jack returns to Texas to ride bulls in the rodeo where he falls in love with and marries a cowgirl, Lureen Newsome (Anne Hathaway), and they have a son. However, for the next 20 years, Ennis and Jack meet a few times a year for a fishing trip where they can freely express their love for one another, both emotionally and physically. The film shows the toll hiding their forbidden love takes on them and their relationships outside their romance.

Brokeback Mountain has the burden of history on its shoulders, being a movie about a love between cowboys, and the fact that it is the first film distributed by a big Hollywood studio (Focus Features, a division of Universal) and getting a wide release that directly focuses on a gay love affair between men. While the film can take a lot of credit for being a landmark in American cinematic history, the contents of the film aren’t as great. Mainly it is a combination of faulty direction and a flawed script. Like director Ang Lee’s previous film, 2003’s The Hulk, Brokeback Mountain is choppy, clumsy, and often dull. Add the fact that this film is alternately dry and cold, and you don’t have the makings of a great romance film. Sometimes The Hulk had moments that were quite novel, really clever, or simply brilliant filmmaking choices, and Brokeback Mountain is that way. However, dross sometimes weighs down the clever cinema. As for the script, an adaptation of an E. Anne Proulx story by Diana Ossana and Pulitzer Prize-winning novelist Larry McMurtry (Lonesome Dove), it does indeed seem like a short story padded with a sagging and problematic middle to make a longer story.

That shakiness carries over to the acting. Heath Ledger is superb, often rising above the material and sometimes dragging the material up to his heights. His performance rings true; he certainly comes across as a dirt-poor cowboy, trouble and conflicted about all his personal relationships. His eyes are so expressive, and his facial expressions are riveting and absorbing. On the other hand, Jake Gyllenhaal really isn’t that good, and except for a moment here and there, his performance seems forced… phony even. That especially puts a damper on the screen chemistry between the leads. The supporting performances are good, though the parts are too small. Randy Quaid is menacing as the surly rancher who discovers Ennis and Jake’s secret. Michelle Williams is also quite good as Ennis’ long-suffering wife, Alma, and there are moments when she lights a fire that is as good as anything else in this film.

Certainly there are moments in Brokeback Mountain that completely impressed me. The opening act of the film, which reveals the origin of the cowboy’s love, is truly, truly expert filmmaking. The ending is heart-rending and poignant, with Ledger giving a performance in the last act that is good enough to save the entirety of another film. It’s the vast, clunky wasteland in the middle of Brokeback Mountain that keeps it from meeting its promise greatness.

Posted by Leroy Douresseaux at 7:29 PM