Review: "Saw II" is an Excellent Follow-up to Original Film 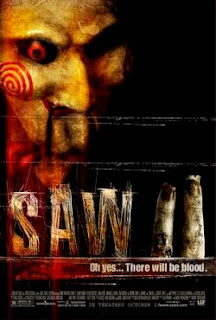 HORROR/THRILLER with elements of fantasy

Called to a crime scene, Detective Eric Mason (Donnie Wahlberg) isn’t really interested in the grisly murder before him. The crime scene has all the markings of Jigsaw, the notorious killer (from Saw) who disappeared leaving a trail of bodies behind him. Jigsaw leaves a message taunting Detective Mason, but Mason’s mind is on his troubled, estranged son. Still, the police get a break and discover Jigsaw’s hideout. There, they find Jigsaw, revealed to be John (Tobin Bell), an older, wheelchair-bound man who claims that he’s dying of cancer. And he has one more game to play. Mason and the S.W.A.T. team find a multi-monitor setup playing Jigsaw’s latest game.

Each screen captures a scene from a charnel house. Eight strangers, including Mason’s son, Daniel (Erik Knudsen), are trapped in the dilapidated house, forced to play Jigsaw’s twisted game. In various locations in the house, Jigsaw has hidden antidotes to a nerve gas that is steadily pumped into the house from some unknown location. The eight player/captives have less than two hours to solve the riddles and games that test their wits and put their lives in jeopardy. They also have a mysterious connection. Meanwhile, Mason and Amanda (Shawnee Smith), another detective familiar with Jigsaw, try to find the location of the death house.

Saw II is mean, nasty, gory, shocking, and occasionally repulsive, but it’s just about everything a good horror movie should be. Yeah, there are a few slips ups. Putting Jigsaw/John front and center turns the movie into a kind of a police thriller. How a fatally ill man can set up all those contraptions of death (doing it with very little help) stretches the willing suspension of disbelief into the realm of supernatural.

The acting is quiet good; in fact, Donnie Wahlberg could give his brother Mark a run for his money. It’s fun to see the police run around confused and confounded. The eight player-captives are a nice lot of miscreants, and the script characterizes them just right for this concept. We understand just enough about them to understand why they’re in this predicament Jigsaw created specifically for them. Also, this scary movie has some scenes (the well of needles) that’ll make you want to scoot down really deep into your seat, skin crawling and hairs on end. Saw II is all bloody hell and bloody fun. There are head wounds, drug needles, sharp objects, blood splatters, and mortal combat nicely spaced by a twisted script. What more do you want from a scary movie?

Posted by Leroy Douresseaux at 1:51 PM