Review: "Spider-Man 2" is a Superb Sequel 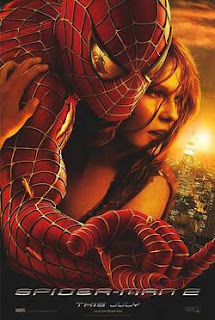 SUPERHERO/ACTION/DRAMA/ROMANCE with elements of sci-fi

I had mixed feelings about the first Spider-Man, released in 2002. The action sequences featuring Spider-Man rescuing folks, being his Spidey self, and fighting the Green Goblin were for the most part pretty cool. The (melo)drama was well conceived, but was too dry and flat. Director Sam (Evil Dead) Raimi’s sequel, Spider-Man 2, doesn’t suffer from flat drama, and the action is even better than the first time. After X2: X-Men United, this may be the best superhero movie ever.

As SM2 starts, a myriad of personal problems beset our hero, Peter Parker (Tobey Maguire), and being Spider-Man doesn’t help any of them. He’s broke, and the bank is about to foreclose on his Aunt May’s (Rosemary Harris) home. He isn’t making enough money taking photos for the Daily Bugle, and his newspaper boss, J. Jonah Jameson (J.K. Simmons), doesn’t cut him any slack. Parker is in love with his longtime friend Mary Jane Watson (Kirsten Dunst), but he’s afraid to let her into his life for fear that one of Spider-Man’s enemies will eventually use her as a pawn in their revenge schemes against him. His best friend Harry Osborn (James Franco) believes that Peter and Spider-Man have a close professional relationship, and Harry hungers to avenge his father Norman’s aka, the Green Goblin (Willem Dafoe) death (he believes) at the hands of the web-slinger. Peter’s also still haunted by the death of his Uncle Ben (Cliff Robertson), for which he blames himself. If that weren’t enough, Dr. Otto Octavius (Alfred Molina), a scientist Peter admires, becomes a dangerous fiend known as Dr. Octopus, who has four monstrous mechanical arms attached to his body and who blames Spider-Man for his fate.

For years, my friends and I wondered if any Hollywood studio could make a good Spider-Man movie. Thanks to computer generated imagery and computer rendered images, at least the gravity defying antics of superheroes can be seamlessly translated from the four-color page of the comic book to the big screen. The SFX filmmakers on Spider-Man do extraordinary work creating a CGI Spider-Man who soars, spins, dips, hops, leaps, slides, dives, jumps, flips, and break dances across, through, and over the landscape of NYC, the city that is a very well used character in this film.

The writing, the second element very necessary for translation of superhero to screen, is much improved over the first film, likely because the three writers of the screen story are very familiar with superheroes. The strong writing of this film is combined with the fine acting of the first film, which carries over to SM2, and that’s what makes the drama so palatable. Of particular note is Rosemary Harris as Aunt May; Harris not only brings a solemn note to this fantasy film, but she also helps to humanize the Peter Parker character and lend credence to the idea of the hero as a regular guy dealing with the ups and downs of life.

Much credit to Sam Raimi, known for his horror and fantasy films, he is actually a very talented director who is equally at home with drama as he is with the fantastique. If he didn’t prove it in A Simple Plan, he certainly proves it with Spider-Man 2

. Raimi can bring tears to your eyes with the drama and romance, and he can knock you back into the seat with heart-stopping action. Raimi’s new film will make your spirit soar vicariously with Spider-Man as he swings on his magical webbing over the city.