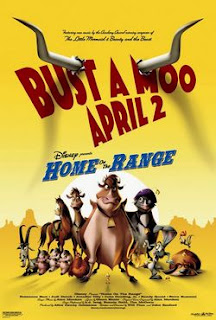 ANIMATION/COMEDY/FAMILY with some elements of Musical and Western

When Maggie the Cow’s (Roseanne Barr) owner looses his farm after all of his cows (except Maggie) are stolen, Maggie becomes the newest resident of Pearl Gesner’s (Carole Cook) farm, A Patch of Heaven. But Cooke is in debt to the local bank, and the county is foreclosing the farm. It seems, however, Pearl isn’t the only farm in financial dire straights. The bandit, Alameda Slim (Randy Quaid), he of the yodeling voice that hypnotizes cows, is rustling all the cattle in the territory. When the farms and ranches go belly up, in swoops Mr. Y O’Dell to win the auctions on the foreclosed properties.

Maggie joins two other cows, the dour and proper Mrs. Calloway (Judi Dench) and the sweet-natured cow with a poor singing voice Grace (Jennifer Tilly) save the A Patch of Heaven. They resolve to catch Alameda Slim and earn the $750 bounty on his head, just enough to save the farm. But joining in on the bounty hunting fun is Buck (Cuba Gooding, Jr.), a hyperactive horse who wants to be a hero, and Rico (Charles Dennis), a tall and dark bounty hunter with his own nefarious plans.

Home on the Range is reported to be The Walt Disney Company’s Feature Animation unit’s final full-length animated feature done in traditional 2-D or hand drawn animation for the foreseeable future. That ends a 44-year tradition that began with Snow White and the Seven Dwarves

, but Disney’s Australian unit will reportedly continued to produce low budget feature length animation for theatrical and straight to video/DVD release.  [Since I wrote this review back in 2004, the management of Walt Disney Animation Studios changed, and 2D animation is alive an well at the house of mouse.]

If it is, Home on the Range

is the wrong way to go out. It has a few good moments, and some standout voice performances, especially by Cuba Gooding, Jr., Judi Dench, and Jennifer Tilly. There are plenty of interesting or, at least, humorous and likeable characters. I liked Alameda Slim’s three, goofy, identical nephews.

But Home on the Range is mainly bad or mostly mediocre. Roseanne’s voiceovers are too up and down – really good or really dull. The art direction is nice but not exceptional, and the color palette is garish and flat. The film story and the pace drag from the beginning, gaining life only in the last quarter hour or so. Alan Menken’s score is also flat and barely alive, unlike his Oscar-winning efforts for such films as Beauty and the Beast and Aladdin. Having Bonnie Raitt, k.d. lang, and Tim McGraw give voice to the film’s songs don’t help.

Home on the Range is still a decent trip to the movies for (small) kids, but otherwise, this movie is best treated like a direct-to-video release and seen at home.