Disney's The Princess and the Frog FUN FACTS 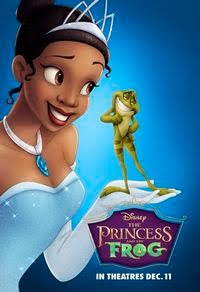 Walt Disney's The Princess and the Frog FUN FACTS

· FROG FUN -- Animators and visual development artists invited a host of real frogs into the studio in order to truly appreciate what makes frogs frogs.

· PAYING HOMAGE – During “Down in New Orleans” early in the film, the carpet from Aladdin is being shaken up on a wrought-iron balcony. Mama Odie comes across the lamp from Aladdin during “Dig a Little Deeper.” A Mardi Gras parade float is modeled after King Triton from The Little Mermaid—on it are caricatured versions of directors John Musker and Ron Clements (who also directed The Little Mermaid, Louis realizes his dream of playing with a jazz band and the band is called the Firefly Five Plus Lou after a Disney Animation ragtime band from the 1940s-50s known as the Firehouse Five Plus Two (the film’s piano player is even modeled after Disney Legend Frank Thomas was the piano player for the Firehouse Five Plus Two).

· ALL THAT RAIN -- Ron Clements was at the New Orleans Jazz & Heritage Festival when he got caught in a downpour and took cover under a table. Clements later added the scene in the bayou in which Tiana and Prince Naveen get caught in the rain.

· BLOWING HIS OWN HORN -- Terrence Blanchard, who is a native New Orleans jazz legend and trumpet player, played all of alligator Louis’ trumpet parts in the film. He also voiced the role of Earl the bandleader in the riverboat band.

· PICTURE THIS -- Filmmakers took more than 50,000 photos of local iconic images to use as reference and inspiration including places like the buildings, restaurants and the garden district.

· EVERYBODY LOVES A PARADE – Filmmakers were invited to participate in Mardi Gras aboard a float. At the end of the film, there are caricatures of the directors throwing beads off the float during the wedding parade.

· A GOOD CAUSE -- During their time in New Orleans, directors Ron Clements and John Musker, and producer Peter Del Vecho volunteered for Habitat for Humanity to help rebuild New Orleans.

· ALL IN THE FAMILY -- Some of the background characters were based on members of the production crew. The man with the horse in the opening sequence was based on supervising animator Eric Goldberg. Producer Peter Del Vecho’s likeness can be seen doing the tango across the dance floor at the Masquerade Ball. The girls swooning after Prince Naveen are all based on members of the production team. Marlon West (EFX supervisor) and Bruce Smith (supervising animator) inspired Tiana’s friends in the café, and writer Rob Edwards’ likeness is part of the band. Head of story Don Hall voices the character of Darnell. Storyboard artist Paul Briggs voices the character of Two Fingers.

· LOCAL TALENT -- “Trombone Shorty,” a well-known local musician, played on “Down in New Orleans.” Al Hebron who was the filmmakers’ local tour guide was tapped to provide the voice of the riverboat captain.

· MULTI-TALENTED -- Terence Simeon, Grammy Award®-winning local musician, played the accordion, rub board, triangle and squeezebox on the Zydeco song "Gonna Take You There."

· ALL LIT UP INSIDE -- Randy Newman provides the voice of firefly cousin Randy, who is a caricature of the composer. Newman was actually cast to voice several characters in the film—a raccoon, a turtle—but only the firefly made the final cut.

· PLAY IT AGAIN -- One of the most thrilling moments for director Ron Clements was when he got a personal performance from Randy Newman. Clements arrived early to the session at Newman’s house and the Oscar®-winning composer played the first song he wrote for the film.

· MUSIC TO MY EARS -- Music plays such an integral part of New Orleans lifestyle that filmmakers felt it important to reflect that diversity in the film. Oscar®-winning composer Randy Newman (Cars, Monsters, Inc., Toy Story) created an all-new score for the feature in a range of styles, including jazz, blues, gospel and zydeco; and featuring seven new songs.

· NOW HEAR THIS -- Sound designer Oden Benitez went to Jackson Square in New Orleans to record the sounds of the church bell and streetcar.

· LEGENDS -- One of the most thrilling trips to New Orleans for directors Ron Clements and John Musker was when they recorded Dr. John and Randy Newman at the local recording studio The Music Shed (which looked like a corrugated steel shed). The Gospel Choir was also recorded in the studio, where artists such as Robert Plant, Fats Domino and Norah Jones have all recorded. Both Dr. John and Newman have strong connections to New Orleans.

· INDEPTH RESEARCH -- Filmmakers took the Nanchez Riverboat tour to ensure the authenticity of the riverboat scenes. They also took a private tour of the streetcar system in New Orleans.


The Princess and the Frog