Harry Potter and the Half-Blood Prince Revels in Character Drama 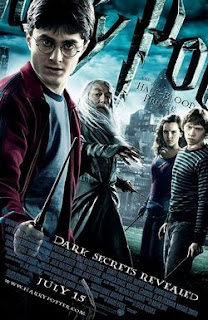 The sixth installment of the Harry Potter film franchise, Harry Potter and the Half-Blood Prince, finds the dark lord, Voldemort increasing his attacks on both the Muggle and wizarding worlds. As he begins his sixth year, Harry Potter (Daniel Radcliffe) believes that Hogwarts is no longer the safe haven it once was, so he searches the school for hidden enemies. Harry focuses his investigation on his rival, Draco Malfoy (Tom Felton), who does seem to be creeping around the castle a lot. Meanwhile, in the halls of Hogwarts, love is in the air

However, Hogwarts’ headmaster, Professor Albus Dumbledore (Michael Gambon), is more focused on preparing Harry for the coming final battle with Voldemort that he knows is fast approaching. Together, Dumbledore and Harry work to discover the truth behind Voldemort’s powers. Dumbledore recruits his old friend and colleague, Professor Horace Slughorn (Jim Broadbent), a well-connected wizard who previously taught at Hogwarts, as the new potions instructor. Slughorn holds information that could be crucial in the battle with Voldemort, because Slughorn was a mentor to 11-year-old Tom Riddle (Hero Fiennes-Tiffin), the student who would become the dark lord.

Meanwhile, some of the students are feeling the rage of teenage hormones. Harry finds himself increasingly drawn to Ginny Weasley (Bonnie Wright), the sister of his best friend Ron Weasley (Rupert Grint), but another student, Dean Thomas (Alfie Enoch), is also vying for Ginny’s attention. The spunky Lavender Brown (Jessie Cave) has marked Ron for amorous conquest, which makes Hermione Granger (Emma Watson), who has strong feelings for Ron, simmer with jealousy (although Hermione is determined not to show her feelings). Remaining aloof from the romance, Draco looks to make his own dark mark, one that may lead to tragedy.

The way it begins, Harry Potter and the Half-Blood Prince

looks like it is going to be a long slog through a muddled movie full of mumbling characters and awkward scenes, but the film turns out to be a delight. At times, this movie seems entirely divorced from the magical reality created by J.K. Rowling

, author the Harry Potter series of books from which this film series is adapted (as if you didn’t know…). However, the focus of Half-Blood Prince is on character drama. This is the first time in the series that the story really stops to consider the costs (personal and professional) of the state of civil war in the wizarding world.

Playing Draco Malfoy, actor Tom Felton portrays the costs of that war and the toll it a takes on the youth of the wizarding role, in his best performance to date. Michael Gambon, playing Dumbledore as a fierce Christ-like warrior marching inevitably towards his doom, also turns in a good performance. The always-good Jim Broadbent balances the bon vivant façade behind which Horace Slughorn hides his guilt with a sense of quiet desperation.

The rest of the cast, especially the star trio of Daniel Radcliffe, Rupert Grint, and Emma Watson are more earnest than good, but they sell their parts well. They’re also the best they’ve been at depicting the puppy love at which they’ve only teased in the earlier films. Somehow, this story of love and war comes together, until, by the end, you wish Harry Potter and the Half-Blood Prince wouldn’t end.