Review: "The Bourne Supremacy" Was the First Greengrass-Damon Joint 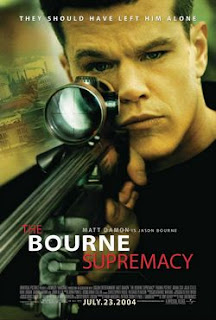 Jason Bourne (Matt Damon) has been hiding in India with the love of his life Marie (Franka Potente) since the incidents of the film The Bourne Identity. However, the ghosts and remnants of one of his long-forgotten missions come back to haunt him, and tragedy strikes. So Jason takes the war back to the Americans who are hunting him for two murders they believe he committed during a botched CIA operation in Berlin, Germany. Once again, Jason has to take up his former life as a highly trained super assassin to survive and find out who is framing him.

needed more, and here, they’re mostly checker pieces moved around a board. That wasn’t the case in the first film. Supremacy has lots of actions, excellent suspense, and thrills that run the razor’s edge, but the drama and character interplay is watery. Every time, two characters are about to develop a good conflict or relationship, the film abruptly leaves for some highflying, though quite thrilling, action.

Matt Damon really makes this film. He’s a good actor and has a wonderful and endearing screen persona, and has an engaging personality – even when he’s popping caps in someone. He’s adept at playing the victim and the victimizer – the hunted and the hunter. He sells you on Bourne’s perils, but makes you anticipate that Bourne will survive anything and find his way out of any trap. It’s the modern day black ops stud as Indiana Jones. If you liked the first film or movies like Ronin (1998), you’ll be down with this.