Original Walt Disney's Alice in Wonderland is not Exactly Classic 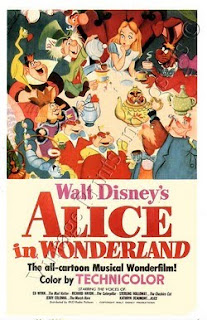 TRASH IN MY EYE No. 169 (of 2004) by Leroy Douresseaux
Alice in Wonderland (1951) – animation
Running time: 75 minutes (1 hour, 15 minutes)
DIRECTORS: Clyde Geronimi, Wilfred Jackson, and Hamilton Luske
WRITERS: Winston Hibler, Ted Sears, Bill Peet, Erdman Penner, Joe Rinaldi, Milt Banta, William Cottrell, Dick Kelsey, Joe Grant, Dick Heumer, Del Connell, Tom Oreb, and John Walbridge with Aldous Huxley (based upon the book by Lewis Carroll)
PRODUCER: Walt Disney
EDITOR: Lloyd Richardson
Academy Award nominee
ANIMATION/COMEDY/FAMILY/FANTASY/MUSICAL
Starring: (voice) Kathryn Beaumont, Ed Wynn, Richard Haydn, Sterling Holloway, Jerry Colonna, Verna Felton, J. Pat O’Malley, Bill Thompson, Heather Angel, Joseph Kearns, and James MacDonald
Walt Disney’s Alice in Wonderland is animated feature film adaptation of Lewis Carroll’s world-renowned children’s novels, Alice’s Adventures in Wonderland (1865) and Through the Looking-Glass (1872). The film takes elements from both books, but especially the more popular Alice. Thankfully, the film manages to be something on its own as its screenplay could never capture subtle satire, allusion, symbolism or the mysterious meanings behind Carroll’s remarkable work.
The adaptation is rather simple, Alice (Kathryn Beaumont) follows the White Rabbit (Bill Thompson) down a deep, dark hole in a tree and ends up in Wonderland. She has many encounters with the land’s strange inhabitants, including a tumultuous run in with the violent-tempered Queen of Hearts (Verna Felton), before the inhabitants of Wonderland chase her out of their domain.
Although Alice in Wonderland would stand head and shoulders above most other feature-length animated films, when compared to the Disney greats, this film isn’t one of them. It’s actually quite dry for most of its running time. What makes the film so memorable is the animation that is drawn to resemble the work of book illustrator John Tenniel, whose drawings for the Alice novels would become the definitive visual interpretation of Carroll’s characters. The Disney animation artists do a worthy job turning Tenniel’s precise delineation into the line work necessary for animation.
The second really memorable element of the film is the superb voice acting. Each and every actor deserves notice, from the starring roles to the small bits. I especially liked Ed Wynn as the Mad Hatter, Jerry Colonna as the March Hare and, of course, Kathryn Beaumont as Alice.
The film’s 14 songs are the most thus far for a Disney animated film. They are good, though not great, except for the one that has most stayed in the public’s pop culture conscience, “I’m Late,” written by Bob Hilliard and Sammy Fain.
6 of 10
B
NOTES:
1952 Academy Awards: 1 nomination for “Best Music, Scoring of a Musical Picture” (Oliver Wallace)
Posted by Leroy Douresseaux at 9:00 AM