Sky Captain and the World of Tomorrow a Fluffy Fantasia 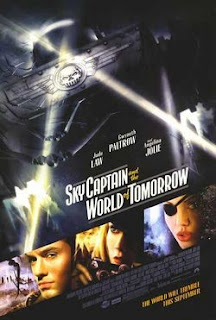 SCI-FI/ACTION/ADVENTURE with elements of a mystery

Writer/director Kerry Conran’s Sky Captain and the World of Tomorrow is the first feature film released to theatres in which the live action photography was shot entirely against a blue screen. After the completion of principal photography, the filmmakers filled in every frame-detail digitally. The film has virtually no real sets and no actual locations. Digital technology and CGI (computer generated imagery or computer graphic imagery) created the sets: from the skyscraper mountains of 1930’s New York City (an NYC that never quite existed) to the lush primordial jungle of a lost island; from the art deco offices of the Chronicle newspaper offices in New York to the streamlined sci-fi fortress of the mad villain.

In the story, Chronicle newspaper reporter Polly Perkins (Gwyneth Paltrow) is investigating the disappearances of several famous scientists when she meets Dr. Walter Jennings (Trevor Baxter) who believes that he will be the next scientific genius to be kidnapped. The doomed man whispers one word into her ear, the name of the man hunting him, Totenkopf. Polly enlists the help of her old flame, Captain H. Joseph Sullivan (Jude Law) – aka – Sky Captain, an ace aviator with daredevil flying skills, a heroic pilot who is part Buck Rogers and part Indiana Jones, who is also hunting Totenkopf. Meanwhile, the mysterious Dr. Totenkopf sends his giant robots and other diabolical machines around the world to steal machines and building supplies. Polly and Sky Captain travel to the Himalayan Alps and beyond in search of the evil mastermind behind a plot to destroy the world. With the help of Sky Captain’s old friend, Franky Cook (Angelina Jolie), the captain of an amphibious squadron, and Sky Captain’s technical super genius Dex Dearborn (Giovanni Ribisi), Polly and Sky Captain are the planet’s only hope against Totenkopf’s plot.

Sky Captain and the World of Tomorrow

certainly wears its influences on its sleeves. The film borrows (current PC term is homage) from films like King Kong

The acting is pretty good, good enough for a film that is just a fluffy piece of adventure entertainment. There is, however, something great about Gwyneth Paltrow as reporter Polly Perkins. She plays the part with the sass and self-assuredness of the great “girl reporters” of the screen. It’s a shame her character was lost in a film in which the effects and explosions dominated the tale.

But is the movie good? Sky Captain is a rollicking adventure like Raiders of the Lost Ark

, itself an homage to old Saturday matinee adventure serials, but Sky Captain isn’t as good as Raiders. In fact, sometimes, the film is quite dry, and for all its visual aplomb, the film has nothing to say. The wonderful digital visual images often come across as plastic fantastic. The film has one truly great sequence, Sky Captain’s duel with Totenkopf’s flying machines through the concrete canyons of New York City is as good as any other aerial duel every put on film. A later underwater duel is quite good, but not as great as NYC throw down, but still good.

Early on, I found the film’s retro-look and its hazy, quasi color photography that was made to look black and white annoying. The story and plot is light, tightly wound, although the villain’s motivation and plot are ridiculous. The film stumbles drunkenly through the last act to the end, and the resolution with Totenkopf is a miscalculation. It’s a good time at the movies, and Sky Captain and the World of Tomorrow actually isn’t as forgettable as a lot of other summer popcorn fluff. I wouldn’t mind visiting the scenario again on DVD, and a sequel would be sweet treat on the level of a Hershey’s Kiss.