After the Wedding Offers Stunning Surprises 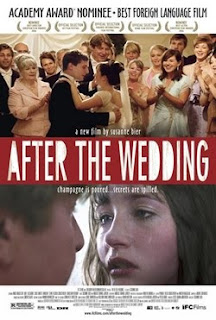 The Danish film, Efter brylluppet, earned a 2007 Foreign Language Oscar nomination (as a representative of Denmark), and received a 2007 theatrical release under its international English title, After the Wedding. The film follows a Danish expatriate returning to his homeland and learning a life-altering family secret in this emotionally charged drama with a unique twist.

) runs an orphanage in India for children who would otherwise likely end up as child prostitutes, but the orphanage is failing. He travels to Copenhagen, Denmark to meet a self-indulgent billionaire businessman named Jørgen Hansson (Rolf Lassgård), who has made the offer of generous donation. Jørgen insists on meeting Jacob as a condition for getting the money, but Jørgen represents everything Jacob has come to abhor. When Jacob arrives in Denmark, he discovers that Jorgen is attaching an ever-growing list of demands to his donation.

Jørgen suddenly invites Jacob to his daughter, Anna’s (Stine Fischer Christensen) wedding, where Jacob also meets Jørgen’s wife, Helene (Sidse Babett Knudsen). Getting introduced to Jørgen’s family further complicates the matter of the so-called gift, but for all the surprises that await Jacob at the wedding, it is after the wedding that the biggest shocks come.

Early on, After the Wedding

comes across as a somewhat cool and aloof foreign film, but around the 30-minute mark it becomes an emotionally powerhouse of family melodrama. As the machinations and family history reveal themselves, the film becomes something of a sordid potboiler, unusual for a family drama that isn’t also a soap opera.

Director Susanne Bier masterfully mixes quality acting and raw emotions with a series of fiercely-staged intimate and personal confrontations between characters that would be uncomfortable to witness in real life. (Johan Söderqvust’s haunting score serves Bier’s goals quite well.) The film’s fault lies in that the story requires the audience to have an intimate knowledge of the characters and of the characters’ closeness with one another, but the script largely leaves the characters as mysteries or ciphers.

After the Wedding boldly addresses issues of mortality, control, and devotion. Bier doesn’t pretend that even the strongest and deepest love between two people is a perfect thing. It can be as messy and ugly as it can be beautiful and sustaining. When films deal with relationships in such a frank and candid fashion, they are treating their audiences with respect.