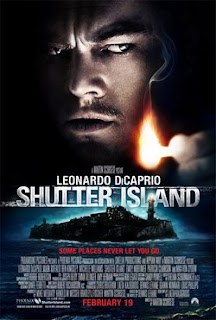 ). Based on the best-selling novel by Dennis Lehane

), Shutter Island is a psychological-mystery thriller set entirely on a fortress-like island housing a hospital for the criminally insane. As I watched this engaging, haunting tale, I certainly understood what the term, “riveting” means when applied to movies. I also watched an outstanding actor take a good film and make the story work on so many more levels than it could have without him.

Shutter Island is set in the year 1954. U.S. Marshal Teddy Daniels (Leonardo DiCaprio) and his new partner Chuck Aule (Mark Ruffalo) are summoned to Shutter Island to investigate the disappearance of Rachel Solando. Solando, who drowned her three children, disappeared from a locked room within the impenetrable Ashecliffe Hospital. Teddy and Chuck arrive at the remote, windswept isle and find the situation tense, and an eerie, volatile atmosphere suggests nothing is quite what it seems. Psychopathic patients surround them and the brilliant Dr. Cawley (Ben Kingsley) psychoanalyzes Teddy and Chuck’s every move, even as he presses them to find Solando.

As the investigation moves forward, a hurricane bearing down on the island escalates. Teddy’s suspicions about both the facility and the investigation begin to grow as he uncovers hints and rumors of sordid medical experiments and secret wards within the hospital. But the more he digs into this mystery, the more Teddy realizes that he may never leave Shutter Island alive.

Without giving too much more about Shutter Island, I can say that both Martin Scorsese and Leonardo DiCaprio deliver their usual high quality work. For Scorsese, Shutter Island is a chance to make an existential terror film in the tradition of the films of producer Val Lewton

(Cat People). In a way, Shutter Island is less about story and more about genre. This movie is an exploration of the conventions of genres like Film-Noir and the detective thriller, and it also plays on the styles and themes of old Hollywood thrillers that focus on the psychology of the characters.

As good as Shutter Island

is, what makes it a great film is Leonardo DiCaprio’s performance. DiCaprio sells the viewer on everything about Teddy Daniels, his habits, facial ticks, demeanor, belief system, conflicts, dilemmas, struggles, and even Teddy’s sharp, off-kilter sense of humor, founded in part on a world view shaped by his time as a serviceman during World War II. I am not trying to diminish Scorsese’s contribution; it is no coincidence that DiCaprio has delivered great performances in all four of the movies that he has made with Scorsese. Whatever one might say about Scorsese, he is an actor’s director, and he finds ways to get intense, terrific performances from all his actors – from the most talented to the ordinary.

But Shutter Island is ultimately all about Teddy Daniels. Its success as a taut, riveting thriller that grabs the viewer and holds him until the very end rests in DiCaprio. Because he has us enthralled by his performance, DiCaprio also has us as engrossed with this mystery and as we are absorbed with Teddy. Shutter Island’s resolution will no doubt leave many viewers with questions, but there is also no doubt that this is one of those occasions when the lead actor is so good that he makes even a terrific movie unforgettable and special.