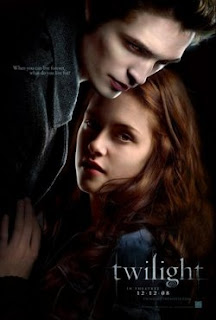 The 2008 box office smash, Twilight, is based on the 2005 novel of the same name written by author Stephenie Meyer (The Host

). Twilight is the story of an outsider girl who falls for a chivalrous vampire.

Isabella (prefers “Bella”) Swan has always been a little bit different and has never cared about fitting in with the trendy girls. When her mother and her new husband move to sunny Florida, Bella returns to the rainy little town of Forks, Washington, to live with her father, Police Chief Charlie Swan (Billy Burke). Surprisingly, Bella does make a few friends at the local high school, but she finds life dull. Then, Bella spots the school’s strangest students, the Cullens, but she is most captivated by the mysterious and dazzlingly beautiful Edward Cullen (Robert Pattinson), a boy unlike any she’s ever met.

After he saves her life, Edward is forced to reveal to Bella that he is a vampire, but he doesn’t have fangs. His family is unique in that they choose not to drink human blood. The intelligent, sly, and witty, Edward sees straight into Bella’s soul. Her mere presence drives him crazy, and their passionate romance is as thrilling as it is unorthodox. They’re soul mates. However, the arrival of a small pack of vicious vampires threatens the peacefulness of Forks, the Cullens’ way of life, and Bella and Edward’s happiness.

(which is composed of four books – for those not in the know). Twilight

may have vampires, but it is unequivocally a romance. The birth of Bella and Edwards’ love and its continual growth is so powerful that it permeates Twilight and spills over into the readers’ imaginations. These are captivating characters. Bella is an independent girl, who keeps her own counsel. Edward is chivalrous and is something of a Byronic hero.

The success of Twilight as a movie, separate from the Twilight Saga, depended on how the film depicted the intense romance of Bella and Edward. First, screenwriter Melissa Rosenberg did a fantastic job adapting Twilight for the screen. Rosenberg is near-perfect at trimming the novel, creating new scenes that are true to the original text, and keeping pretty much everything from the novel that really encapsulates this story. Director Catherine Hardwicke has this deft touch at getting to the heart of what makes this story work, and she is especially good at capturing the magic of Bella and Edward as a couple. The best example of Rosenberg and Hardwicke’s storytelling is a magical sequence in which Edward puts Bella on his back and takes her on a journey through the lush forests surrounding Forks via the tree tops.

However, the biggest reasons for Twilight’s success are actors Kristen Stewart as Bella and Robert Pattinson as Edward. Stewart, who seems to have the makings of an exceptional actress, embodies the moodiness and independent streak of Bella that define the character. Kristen makes Bella seem like a real person even in the midst of Twilight’s fantastic scenario. Pattinson is simply a beautiful man, and he channels his acting through a passion for his craft; maybe, that’s why Edwards is so fierce and intense. Here, Pattinson is pitch perfect at playing the sly, tormented bad boy.

Stewart and Pattinson are so good that they are this movie. Simply put, Twilight is a winner.
8 of 10
A