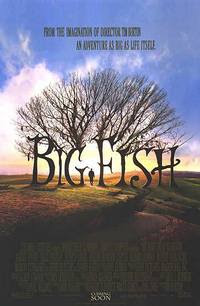 DRAMA with elements of comedy and fantasy

Tim Burton is an imaginative, creative, and innovative filmmaker, but his eccentric vision is traditionally wasted on studio fare. He’s sometimes managed to make average to very good movies out of junk, as in Planet of the Apes. He’s made visually appealing films that sadly misfire, Mars Attacks

. He’s made fairy tales and fables into visually appealing films like Edward Scissorhands

. He occasionally makes a films that live up to people’s expectations of him as a great filmmaker, as in Beetlejuice

. His new film Big Fish belongs in the category with Planet of the Apes

Will Bloom (Billy Crudup) has a father Ed Bloom (Albert Finney) who likes to spin tall yarns. It’s how Ed tells the story of his life, mixing tall tales (or big fish stories) with what actually happened; that must mean his stories have a life lesson somewhere inside. As the Young Ed (Ewan McGregor), he claims to have had many adventures: as a star athlete, as a circus worker, and as a soldier. Will grows to hate those stories and what he sees as his father’s dishonesty. He goes away, until his mother Sandra (Jessica Lange) calls Will and his wife Josephine (Marion Cotillard) home because Ed is dying. Ed wants to make peace with his father, so he tries again to figure out fact from fiction, but maybe he’s missing the point.

For all his visual aplomb and quirkiness, Tim Burton made a pleasant, but ultimately safe father-son movie with a few oddball characters thrown into the mix. And when it’s all said and done, there’s nothing really odd about them other than they might not look or act like the average folks. On the surface, they may appear strange, but underneath, they’re just your typical country witticism-spewing role players. There’s potential in each one, but Burton wastes it by making them less dangerous. Fairy tales and oddities are dangerous because they challenge our preconceived notions of what is and what is not. To make them little more than weird looking is to take away what makes them truly different and all you have left is fluff.

It’s not entirely Burton’s fault; he’s admitted before that he wouldn’t know a good screenplay if he saw one, and weak screenplays are often the biggest flaw of his films. He focuses on making his movies look unusual, but the story ultimately fails to live up to his visual promise.

The acting in Big Fish

is pretty good, but it’s wasted. How can you have a major talent like Jessica Lange and regulate her to making sad faces with sad smiles. Don’t get me started on Robert Guillaume playing the patient and wise Negro who just so happens to say those typically wise-Negro words that finally make Will “get it” about his father.

Big Fish isn’t bad; it’s just pleasant. It’s not a bad time at the movies. There are some laughs and some clever moments. There’s a bit of magic in the air, but be careful you don’t choke on maudlin and sentiment.