North Country is the Legal Thriller as Gritty Drama 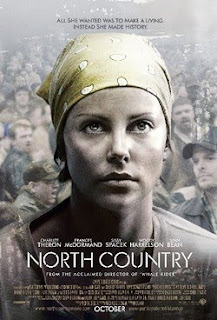 Josey Aimes (Charlize Theron) was stuck in a failed marriage, but this last time her husband beat her is the last time, she tells herself. Josey takes her two children, Karen (Elle Peterson) and Sammy (Thomas Curtis), and returns to her Northern Minnesota home, where she moves in with her parents, Hank (Richard Jenkins) and Alice Aimes (Sissy Spacek). Hank still carries an old grudge with his daughter Josey because Sammy was born out of wedlock when Josey was a teenager.

Encouraged by Glory (Frances McDormand), an old friend, Josey takes a job in the area’s predominant source of employment, the iron mines, where her father also works. However, times are tough, and jobs are scarce. The iron mines are traditionally a man’s job, and the men don’t want women there taking jobs from other men. Hank considers his daughter’s presence a threat to him and one more embarrassment on his family. The male workers let their feelings be known by making the mines an exceedingly tough place to work, and they do that through various forms of harassment – in particular sexual harassment.

Josey speaks out against the hideous treatment she and the other women face, but the mine’s owners, management, and fellow workers, including the other women, meet her with resistance. Her difficulties and the scorn she faces affects her relationship with her children, especially her sensitive teenage son, Sammy, who must not only deal with his mother’s sudden infamy, but also with embarrassing details of Josey’s past that she hoped he’d never have to know. When Bill White (Woody Harrelson) a local lawyer and former hometown hero takes Josey’s case on as a potential class action lawsuit, they’re forced to go it alone until dark secrets from the past come forward and open the eyes of those who should have supported Josey all along.

North Country is based upon and is a fictional account of the first successful sexual harassment lawsuit, Jenson vs. Eveleth Mines, which began in the 80’s and was settled in 1998. The courtroom scenes are TV movie quality (complete with the 11th hour miracle), but resonate when Charlize Theron is on the stand. While North Country

certainly has compelling subject matter, the script seems to cherry pick scenes that go for maximum emotional impact or shock value. There is nothing subtle here, or new for that matter: men angry that there space and manhood have been challenged; assorted rednecks, cowardly women who won’t stand up for themselves, the pissed-off teenage son, the evil mine owner, the self-righteous and judgmental townsfolk, etc.

However, North Country takes a hard look at how honorable people keep quiet and let wrong go unchallenged for fear of drawing unpleasant attention to themselves. That’s why it would have been nice if the film focused less on giving the lead actress scenes she can chew up to get the attention of award voters and more on developing the other characters. Even the worst characters in this movie come across as interesting with something to say – their side of the story. Sometimes the villainy in North Country is just too thick, even if the villainous actions are not only in the realm of possibility, but actually happen in the real world. Fleshing out the “bad guys” would have so enriched the narrative, giving its central message and ideas some real, forceful impact.

Charlize Theron is so beautiful that a movie’s makeup department has to pile on the ugly to make her look plain. That worked in Monster

, the 2003 film that earned her an Oscar, but here, her beauty shows through. She’s the working class babe – a diamond in coal dust. Sometimes, those good looks seem out of place, but when Theron takes an average script and believes in it, she can improve a movie. It’s OK that sometimes what the audience is supposed to think about Josey’s trials and tribulations seem plastered on a big signpost for the audience to see because Charlize looks good even when she’s hamming. Here, she’s mixes drama with a flair for the melodramatic.

) might be dealing in stereotypes, but she’s also dealing in truth. The way Caro portrays small town ignorance and bigotry gives her film sharp teeth and a razor-sharp edge. The meanness of a small town populace that capriciously picks its outcasts; the meanness of women who should be sympathetic to other women; and the meanness of co-workers who go overboard in their harassment of fellow workers take a limp courtroom drama with shoddy supporting character development and propel it to truth. Caro and screenwriter Michael Seitzman may often rely on old dramatic relationship formulas – the kind of relationship dynamics that sell soap operas. Still, North Country is an honest drama that takes no prisoners in depicting cowardice and evil. That is enough to take the edge off its faults.