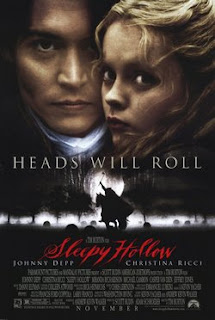 An Academy Award winner (Best Art Direction-Set Decoration) and recipient of two additional nominations (Best Costume Design and Cinematography), Tim Burton’s film Sleepy Hollow is perhaps the quintessential Tim Burton movie, the film that is the visually summation of the promise he showed in such films as Beetlejuice, Edward Scissorhands, and Tim Burton’s Nightmare Before Christmas

. Dark, gothic, and moody, it is a bold fairytale told with modern materials but steeped in early Americana.

The tale is a quirky, modern retelling, or (to use a new term) “reimagination” of Washington Irving’s classic tale “The Legend of Sleepy Hollow

.” In this version, Irving’s famous cowardly hero Ichabod Crane is Constable Ichabod Crane (Johnny Deep) whose superiors send him from New York City to Sleepy Hollow, an isolated village in the upper Hudson valley, to investigate a series of murders in which the victims were beheaded. Crane arrives in the village to find the residents mostly hiding behind locked doors and closed shutters. Everyone knows that the Hessian Horseman (this story’s version of the Headless Horseman and played by Christopher Walken), the spirit of dead mercenary, has returned to earth to kill the hapless citizens of the Hollow.

Of course, Crane is a man of reason and refuses to believe in the horseman. During the course of his investigation, he takes on a ward, Young Masbath (Marc Pickering), the son of the one Horseman’s victims, and falls for Katrina Anne Van Tassel (Christina Ricci), the daughter of a village elder. But soon, Crane witnesses the evil power of the horseman, and his mind spirals into paranoia. He begins to suspect many former allies of conspiring with the Horseman, but will Crane be able to tell friend from foe in time to stop the Horseman and his co-conspirator in time to save his friends?

The film is fun to watch, and the actors are great. They mix serious thespian chops with just the perfect amount of tongue-in-cheek. I loved the cast, and Johnny Depp, a frequent collaborator of Burton, straddles the comic with the mad. Christina Ricci looks as if she were born with her face to be a Burton film icon, but her performance here is a bit uneven. Miranda Richardson also makes the most of her small part; she is wicked with an air of menace about her that helps her steal every scene in which she appears.

The film is absolutely gorgeous, at that time, probably the finest looking film of the fantasy/horror genre since Bram Stoker’s Dracula

. Burton mixes everything together so well; he is truly a visionary and one of the consummate visualists of the last two decades. Hell, he made Sleepy Hollow

a much better film than 1999’s Oscar winner for Best Picture, American Beauty