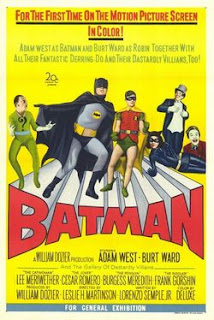 In January 1966, television history was made when the TV show “Batman” debuted. Its blend of camp humor and the large number of celebrities who guest-starred as villains (Roddy McDowall, Milton Berle, Eartha Kitt, Julie Newmar, Zsa Zsa Gabor, Cliff Robertson, and Vincent Price among many) made the show a huge hit with audiences of all ages. A television show based upon a superhero comic book had never been so popular, and “Batman” spawned one of the biggest pop culture fads of that time which included a slew merchandising and memorabilia. Starring Adam West as Batman and Burt Ward as Robin, the series last three seasons (120 episodes) and gave birth to a 1966 feature film, simply titled, Batman, which was released to theatres in between the first and second seasons of the show.

In the feature film, Batman (Adam West) and Robin (Burt Ward) face not one, not two, and not three foes, but four of them combined together as the United Underworld, a quartet of the most diabolical super-villains: the Penguin (Burgess Meredith), the Joker (Cesar Romero), the Riddler (Frank Gorshin), and the Catwoman (Lee Meriwether). Their plan to hold the world hostage involves using a secret invention that instantly dehydrates people and reduces them to small piles of dust. They need Batman out of the way, so Catwoman disguises herself as “Kitka,” a sly Soviet envoy who ensnares Bruce Wayne (West) as bait to draw the Caped Crusader into their deadly trap. What they don’t know is that Wayne is Batman’s secret identity. Will Bruce Wayne’s emerging attraction to Ms. Kitka lead to the destruction of Batman? Can the Dynamic Duo save the world? Tune in…

the movie is, like “Batman” the television series, campy – a style of comedy known for being outlandishly amusing and theatrical. The film and series are likely parodies or send-ups of Batman & Robin’s first big screen appearance: the 1943, 13-part movie serial, also entitled Batman

. The colorful and garish costumes, over-the-top dialogue, sexual innuendo, the farcical plot, and the kooky action scenes are all a tongue-in-cheek ode to an old favorite of serialized fiction and film – the cliffhanger, which often finds the hero or heroes a second away from certain death via some ridiculous invention or mechanical contraption. When the hero is saved or saves himself, it is always by the skin of his teeth via some totally off-the-wall or silly means, but it is all for fun.

In the last two-and-half decades or so, hardcore fans of the Batman comic books and other superhero comic books have come to revile the silliness of the 1960’s Batman, but silliness and big fun were the point of the series. I don’t think this film is nearly as funny or as enjoyable as the TV show, but it’s a nice, cultural oddity worth a few laughs. Personally, I prefer its take on the Batman costumes, as well as its interpretation of most of the characters, compared to most other screen Batman’s. Its importance to film, TV, and pop culture history remains the search to discover why the TV series became so popular at the time it did.