"Pirate Radio" to Debut on DirecTV 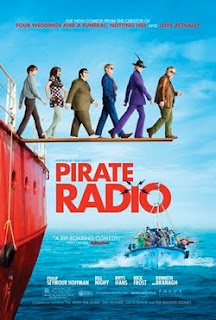 , to DIRECTV customers more than a month before the film’s DVD release date. Beginning today, customers will have access to the ensemble comedy with an all-star cast including Academy Award winners Philip Seymour Hoffman and Emma Thompson – at the click of a button from the comfort of their couch.

tells the true story of a band of rogue radio DJs that captivated Britain in the 1960s, blasting rock and pop music from a boat off-shore in direct defiance of the government. Dubbed ‘pirate radio,’ the non-stop underground broadcast reached nearly half the UK's population and helped deliver the music that has defined a generation. The movie will be available to DIRECTV customers in crisp HD* or in standard-definition (SD). Pricing starts as low as $4.99, for SD, on the DIRECTV Cinema and DIRECTV on Demand platforms.

“DIRECTV Cinema strives to deliver the highest-quality movie experience by offering unique content that is above-and-beyond what consumers find on the usual pay-per-view platform,” said Sarah Lyons, vice president of Marketing for DIRECTV. “DIRECTV is thrilled to continue raising the bar with Pirate Radio, by offering it to our customers more than a month before the film’s DVD release. We will continue to deliver an unmatched in-home movie experience that can only be found on DIRECTV.”

The DVD release of Pirate Radio is currently scheduled for April 13. However, it debuts on DIRECTV Cinema more than a month earlier, on March 11. For more information on movies available through the DIRECTV Cinema platform, visit directv.com/cinema.


About DIRECTV
DIRECTV (NASDAQ: DTV) is the world’s most popular video service delivering state-of-the-art technology, unmatched programming, the most comprehensive sports packages available and industry leading customer service to its more than 25 million customers in the U.S. and Latin America. In the U.S., DIRECTV offers its more than 18.5 million customers the capacity for more than 200 HD channels in Dolby 5.1 theater-quality sound, access to exclusive sports programming such as NFL SUNDAY TICKET™, award winning technology like its DIRECTV® DVR Scheduler and higher customer satisfaction than the leading cable companies for nine years running. DIRECTV Latin America, through its subsidiaries and affiliated companies in Brazil, Mexico, Argentina, Venezuela, Colombia, and other Latin American countries, leads the pay-TV category in technology, programming and service, delivering an unrivaled digital television experience to 6.5 million customers. DIRECTV sports and entertainment properties include three Regional Sports Networks (Northwest, Rocky Mountain and Pittsburgh) as well as a 65 percent interest in Game Show Network. For the most up-to-date information on DIRECTV, please call 1-800-DIRECTV or visit directv.com.
Posted by Leroy Douresseaux at 9:05 AM