The Invention of Lying Tells the Truth 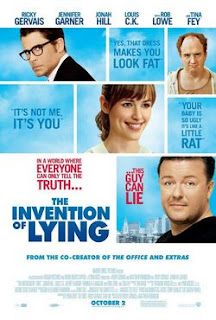 Last fall, Ricky Gervais made his directorial debut with the film, The Invention of Lying, co-directed with Matthew Robinson. The film is about a man who discovers lying in a world where everyone tells the truth – even the brutal truth. Those who saw the trailers (commercials) for this film may not realize that advertising for The Invention of Lying leaves out one important fact.

The Invention of Lying

is not about lying; it is about religion.

The film takes place in an alternate reality where lying and even the concept of the lie do not even exist. People are always telling the truth, and everyone: politicians, advertisers, the man and woman on the street, neighbors, coworkers, employers, and even the person you’re dating speaks the truth and nothing but the truth. Such honesty does not come with a thought of the consequences. Seeing this, even in a movie, is pretty shocking. For instance, it is never cool to hear a coworker just flatly state how much she hates you and is glad to hear that you will be fired. Such blunt truth is the norm in this world.

Mark Bellison (Ricky Gervais) is a down-on-his-luck loser. A failed screenwriter, Mark knows that he is about to be fired, and so do all his coworkers and colleagues. Mark also goes out on an arranged date with a perky young woman named Anna McDoogles (Jennifer Garner), who is brutally honest about her feelings for him. She thinks Mark is nice, but she doesn’t want to have children with a fat man who has a stubby nose.

When his life totally falls apart, Mark reaches the point of desperation when he suddenly says something that simply is not, and thus, he gives birth to the lie. Mark invents the ability to say things that are not true, and, as the only person in the world who can lie, he uses lying to make himself rich. When one of his lies spreads, the entire world starts to hang on Mark’s every word, even his beloved Anna.

Lying isn’t the only thing Mark Bellison’s world is missing. People have no concept of heaven, faith, or God. When Mark creates “the man in the sky,” people believe him because they don’t know he is lying, nor would they even understand the concept of lying. Ultimately, Ricky Gervais and Matthew Robinson use The Invention of Lying to make a few suggestions to the viewer. First, people should do the things that make them happy and not go along with the status quo if it makes them miserable. Also, a person shouldn’t wait to be told what to do, nor should others, even a divine other, make decisions for him.

The Invention of Lying is a great idea, even a wicked idea, but as the film goes on, Gervais and Robinson favor romance over the sharp social criticism about truth and about religion. This is a love story set in a parable and satire, and while the filmmakers handle both well, The Invention of Lying does lack a tangible antagonist. Much of the dramatic conflict is internal – Mark Bellison’s good side versus his selfish, greedy, petty nature. The script never really takes advantage of conflict outside of the lead character: Mark versus his job, society, and his rivals.

Still, this film is surprisingly radical, and the filmmakers mine much of the premise’s richness. Ricky Gervais is, as always, a brilliant, funny man, with a great sense of humor when it comes to poking fun at people and society. Jennifer Garner is surprisingly spry, (although she is a good comic actress), and her performance is pitch perfect for this story. I can forgive The Invention of Lying for its eventual transformation into a conventional romantic comedy, because for most of its hour and a half of story, this movie’s wit is startling. In a landscape of safe, conventional movies, that is worth a lot.