Yours, Mine & Ours a Fun Family Film 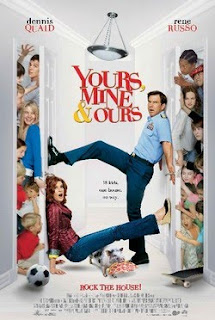 COMEDY/FAMILY with elements of romance

One evening, while he is in the middle of an unpleasant date, Frank Beardsley (Dennis Quaid), a widow, runs into his old high school sweetheart, Helen North (Rene Russo), and it’s as if the thirty years since they last saw each other never passed. Helen, a widow, also feels the attraction and can’t wait to meet Frank again, which they do at a high school reunion cruise. They rush into marriage, but they don’t tell their kids…

But maybe love can’t conquer all. The two families don’t mesh quite as easily as Frank and Helen had hoped. Frank, a Coast Guard Admiral, is a by-the-book disciplinarian, but the free-spirited Helen has no “book” and believes that the home is a place for free expression, not military style discipline. The children are always at odds. Helen’s brood aren’t pleased about moving or sharing rooms with a bunch of uptight strangers, and Frank’s offspring have nothing in common with the unruly and strange pack of kids their father’s new wife brings into their lives.

On the other hand, both sets of children realize that they have a common goal – breaking up their parents’ marriage, so they band together to create the kind of chaos that causes confusion between a couple with different parenting styles. As the kids succeed in their plot, they also realize that they really like each other in spite of their differences. Now, they have repair the bond between Helen and Frank that they broke, but are Helen and Frank still interested in being a couple.

isn’t as good as the Cheaper by the Dozen remake. For one thing, the acting by the leads playing the parents, Dennis Quaid and Rene Russo, two talented actors with a deft touch at comedy, waffles between listless and over done. Quaid has his moments when his talent shines through this murky material, but Russo delivers a surprisingly mediocre turn in a role she should sleepwalk through, or may be she did sleepwalk through it.

Also, 18 child and teen actors can’t get the screen time that even 12 can get, so none of young cast gets a chance to give his or her character personality. The script for the 2003 Cheaper by the Dozen gave the actors playing two of the older children (Tom Welling and Hilary Duff) a chance to bond with the parents (played by Steve Martin and Bonnie Hunt), which gave the comedy some emotional resonance. Here, the script lumps the older kids in completely with the younger ones. The film would have more dramatic resonance if the older ones could be seen as a bridge between what the parents want and what the kids want. This doesn’t happen until the very end, and it comes across as a tacked on happy ending.

Still, Yours, Mine & Ours has some truly funny moments. It’s a silly and fun family flick for parents with ‘tweens and younger. The adult actors give the film some credibility, and director Raja Gosnell (Big Momma’s House and the Scooby Doo movies) keeps the pace fast, only slowing down for some romantic scenes between Quaid and Russo. It’s all too fast for us to stop and examine the numerous cracks in this picture and just fast enough to keep the easy laughs coming. Yours, Mine & Ours is chock full of predictable moments, and the audience can see the punch line the moment any particular joke or gag begins, but it’s all still funny.