War of the Worlds Remake a Powerful SFX Bonanza 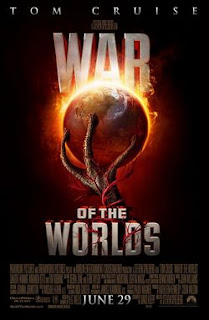 SCI-FI/ACTION/THRILLER/ADVENTURE with elements of drama

Steven Spielberg’s War of the Worlds is a big, giant, summer action movie that worth’s every dime paid to see it, and if you’re going to see it, you must see it on the big screen to appreciate the affect the action sequences can have on you. War of the Worlds may end up being dismissed by the Spielberg haters, but years from not, it’ll be seen as one of the great disaster movies and exceptional sci-fi films.

Ray Ferrier (Tom Cruise) is a bad father, but he’s about to find out just how much his children, teenager-with-attitude Robbie (Justin Chatwin) and his young daughter Rachel (Dakota Fanning), mean to him. Not long after his ex-wife, MaryAnn (Miranda Otto), and her husband, Tim (David Alan Basche), drop the children off for a rare weekend visit, a strange and powerful lightning storm touches down. Not long after the drop off, Ray witnesses something that will change his life and the world forever – a towering three-legged war machine emerges from deep beneath the earth, and almost immediately begins to incinerate everything in sight. Thus, a cataclysmic alien attack on earth begins, and no matter where Ray and his children run on their long journey across a ravaged countryside, they cannot find safety or refuge from the extraterrestrial army of Tripods.

War of the Worlds is certainly a Steven Spielberg film, and like all Spielberg directed action/adventure/thrillers this one delivers the goods. It’s a monumentally breathtaking, heart-pumping, heart-racing, and fear-inducing, gargantuan thrill machine. The film looks good thanks in large part to the usual Spielberg cohorts, such as cinematographer Janusz Kaminski and editor Michael Kahn. Technically brilliant, War of the Worlds is full of the Spielberg magic that can keep you on the edge of your set for about two hours or so. The effects for the alien craft and the destruction they wreak are bloody brilliant and eye-popping, even as mind-bending as something like The Matrix; the destruction is enough to make you run from your seat in the theatre because it seems as if these alien behemoths will walk right off the screen and into your lap.

Tom Cruise gives a fine performance, enough to not only give this effects-heavy (over 500 SFX shots) film some humanity, but to sell the idea that this version of War of the Worlds is about a family surviving disaster that is on an apocalyptic level. This is one time the fine young actress Dakota Fanning does not steal the show because Cruise’s performance reveals that at the core of this fabulous summer, atomic fury, joy bomb is the story of man trying to save the family he neglected. Spielberg’s combination of earthly family values and extraterrestrial fury and the heart stopping and the heartwarming is a winning combination.