The Lost Boys, Eternally Youthful and Forever a Winner 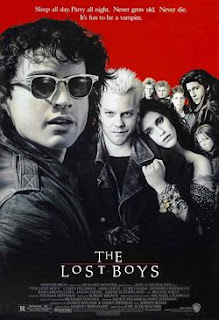 “Sleep all day. Party all night. It’s fun to be a vampire.” was the tagline to The Lost Boys, a Joel Schumacher film that heavily re-imagines J.M. Barrie’s classic play and novel, Peter Pan. The film was a minor hit back when it was released in 1987, but the film has become even more popular (even a kind of cult hit) through its release on home video and later DVD, and its numerous appearances on various cable TV channels. The Lost Boys

also cleverly tweaks and twists some classic vampire myths, folklore, and legends – including some that were invented by Hollywood.

Financial troubles force recent divorcee Lucy Emerson (Dianne Wiest) and her two teenage sons, Michael (Jason Patric) and Sam Emerson (Corey Haim), to move to Santa Carla, CA (actually filmed in Santa Cruz, CA) to live with her father (Bernard Hughes). At first, her younger son, Sam laughs off the rumors of vampires in Santa Carla that he hears from the two brothers, Edgar (Corey Feldman) and Alan Frog, (Jamison Newlander) who run their parents comic book shop on the Santa Carla Boardwalk. However, when Michael starts acting strange (stays out all night, sleeps all day, and tries to attack Sam) and showing classic signs of vampirism, Sam joins forces with the Frog Brothers to find and destroy the head vampire, which she free Michael of the vampire’s curse. Meanwhile, Michael has fallen for a half-vampire teenager named Star (Jami Gertz) and promises to help her and half-vampire boy, Laddie Thompson (Chance Michael Corbitt), for whom she cares. He’s also fallen in with a quartet of brash, teen vampires led by the charismatic David (Kiefer Sutherland).

I’ve seen The Lost Boys so many times, and I’m such a big fan that I don’t know if I can fairly review it for a viewer who hasn’t seen it. Heck, I’d recommend it to anybody. What do I like about it? Hmmm, where to start? It’s a fun, comic horror film, and puts a hip, cool spin on vampires – as they relate to Hollywood productions. It was not quite an MTV-type movie, but it did tap into the early to mid-80’s youth, cultural zeitgeist, if only to get some nice establishing shots of Santa Carla’s youth. Tapping into the style of young people in the mid-80’s also resulted in some flashy costumes of The Lost Boys’ teen characters. Corey Feldman, Corey Haim, and Jamison Newlander looked as if they’d step off the set of a Lionel Richie video (for either of the songs “All Night Long” or “Dancing on the Ceiling”). Jami Gertz and the Lost Boys (even the little half-vampire boy, Laddie) have mounds of big hair to go with the puffy shirts, faux Pirates of Penzance costumes, and Amadeus-vomit-leather ensembles. Somehow, it all looks and feels right – especially the handsome and alluring Kiefer Sutherland who plays a kind of teen rebel/pied piper vampire. He’s the real Peter Pan in this Lost Boys set.

As far as the filmmaking goes: Thomas Newman’s score is a smooth, crisp, and tight suite of music to suggest creepiness. The rewrites that director Joel Schumacher demanded of the original script (and likely done by Jeffrey Boam) turned the story into a tight little thriller with a slight fairy tale feel to it. Once upon a time, two boys and their mother moved to a town of vampires… and everybody was hip, cool, and now.